Zer0 was revealed on February 21, 2012, in the Borderlands 2 Launch Date Trailer. His nickname comes from the "0" hologram sometimes displayed over his faceplate when he dispatches a target. Other emotes and text appear on his faceplate - and on enemies, using the B0re skill - during different actions. Most of Zer0's phrases are spoken in haiku, giving the hint that the assassin may be of Asian decent.

As his face and body are completely covered by his suit, a certain amount of mystery surrounds Zer0's true appearance. In an ECHO recording, Angel remarks that she's not even sure if Zer0 is human; both in-game and promotional material show that he has only four fingers on each hand. His origins and real name are also unknown, giving the character the full mysterious background.

"Decepti0n" grants Zer0 the ability to deploy a holographic decoy of himself and enter an invisible "stealth mode." While cloaked, he can maneuver about the battlefield dealing amplified damage on his next attack. The longer Zer0 stays cloaked, the more damage he can inflict to enemies; however, the shorter Zer0 stays cloaked, the sooner he is able to use the skill again. Zer0 does not enter a separate dimension like Lilith when she Phasewalks, and can still take damage from all sources while cloaked.

Attempting to travel while other players are busy

Sighting a badass or boss

Zer0 often displays holographs from his faceplate, revealing his emotions through this. These include:

During Decepti0n, with the B0re Skill active, various other Emotes can been seen on the Enemies weak points. 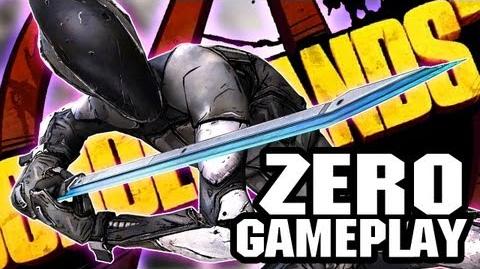 Retrieved from "https://borderlands.fandom.com/wiki/Zer0?oldid=309490"
Community content is available under CC-BY-SA unless otherwise noted.