View source
watch 02:02
Who is Zer0?
Do you like this video?
Play Sound

Zer0 was revealed on February 21, 2012, in the Borderlands 2 Launch Date Trailer. His nickname comes from the "0" hologram sometimes displayed over his faceplate when he dispatches a target. Other emotes and text appear on his faceplate - and on enemies, using the B0re skill - during different actions. Most of Zer0's phrases are spoken in haiku.

As his face and body are completely covered by his suit, a certain amount of mystery surrounds Zer0's true appearance. In an ECHO recording, Angel remarks that she's not even sure if Zer0 is human; both in-game and promotional material show that he has only four digits on each hand. His origins and real name are also unknown, leaving the character shrouded in mystery.

As revealed in the "Ask Dr. Tannis" Section of the Pandoran Gazette, included as a scrap of paper in the Diamond Plate Loot chest, Zer0 is not his true name. The remaining piece of scrap containing the name and gender of Zer0 were not included, but the part that does remain suggests that Patricia Tannis is aware of Zer0's origins.

Following a mission given by Moxxi, Zer0 chases after the bandit lord Bossanova, in search of a Gortys core. They crash into the World of Curiosities, where Rhys and Vaughn are in the process of dealing with August for a Vault Key. Bossanova runs off with Rhys' money, leaving Zer0 to deal with several psychos. Later, Zer0 tracks Bossanova to his hideout, an abandoned Atlas warehouse, and makes his way inside. He later saves Rhys and Sasha from a skag, and takes a lift with them to the center area, where Bossanova is hosting a death race event. Upon spotting Zer0, Bossanova issues a $20,000 reward to anyone who can kill him. Zer0 engages in combat with Bossanova and his bandits, and eventually emerges victorious. He then reports the situation back to Moxxi, while commenting on not having found the Gortys core. Unbeknownst to him, the core was hidden below him, and is later found by Rhys and Fiona.

If the player identifies Fiona as a Vault Hunter back in Episode 3, Zer0 will be available as a team member in the fight against The Traveler. His attack against The Traveler begins with a form of Decepti0n, followed by teleportation blocks and quick blows.

"Decepti0n" grants Zer0 the ability to deploy a holographic decoy of himself and enter an invisible "stealth mode." While cloaked, he can maneuver about the battlefield dealing amplified damage on his next attack. The longer Zer0 stays cloaked, the more damage he can inflict to enemies; however, the shorter Zer0 stays cloaked, the sooner he is able to use the skill again. Zer0 does not enter a separate dimension like Lilith when she Phasewalks, and can still take damage from all sources while cloaked.

Zer0 often displays holographs from his faceplate, revealing his emotions through this. These include:

During Decepti0n, with the B0re Skill active, various other Emotes can been seen on the Enemies weak points.

A close-up of Zer0's face 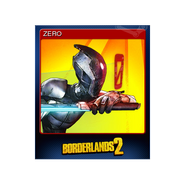 The Steam trading card for Zer0