Zapped 2.0 is an optional mission in Borderlands: The Pre-Sequel, given by Janey Springs in Concordia once Zapped 1.0 has been completed. The objective of the mission is to assure the quality of the ice-upgraded prototype weapon.

Upon accepting the mission, the Vault Hunter will receive the Inhibiting Zappinator, an upgraded version of the prototype laser weapon, which deals cryo damage.

The mission waypoints will mark two tork-infested areas in Stanton's Liver. One area is The Duct, the eastern area behind Stanton's Liver where the mission All the Little Creatures occurs. Another area is The Ventricles to the southwest, a cavern housing a large numbers of torks, tork queens and a swagman. To reach The Ventricles quickly, start from the entrance to the area, jump up the cliff near the "Refinery Complex" signboard, then jump across.

The mission is completed by killing fifteen torks with the provided gun. The Cryo Vines in the area can be used to help with achieving the bonus objective, which is to shatter five torks after freezing them solid.

Torks killed in any area, not just Stanton's Liver, will count towards the objective.

"This is turning out way better than anyone could have expected. Except maybe for those torks." 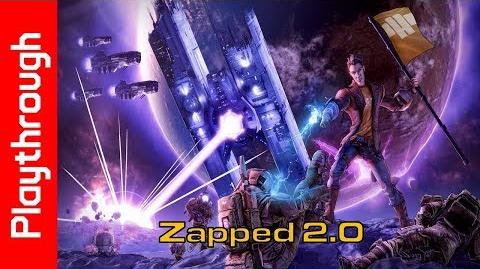 Zapped 2.0
Retrieved from "https://borderlands.fandom.com/wiki/Zapped_2.0?oldid=416644"
Community content is available under CC-BY-SA unless otherwise noted.