Zane Flynt is the playable Operative class character in Borderlands 3.

Brother of the bandits Baron Flynt and Captain Flynt who began his life of violence as a teen, Zane left them to join a black ops mercenary unit and has since become one of the most capable operatives in the galaxy, doing odd jobs for the highest bidder. Having taken every kind of mercenary and assassination job there is, Zane found it increasingly difficult to enjoy a moment's peace due to so many people wanting him dead. He traveled to Pandora to lay low for a while, where he was recruited into the Crimson Raiders to assist in their battles against the Children of the Vault.

Zane's unique Ability mechanic allows him to use two active abilities at the same time, at the cost of forfeiting the use of grenades. While using a second ability reassigns the Grenade button (RB/R1/G) to that skill, equipped grenade mods will remain in their loadout slot. Additionally, each of Zane's active skills have a secondary function that can be activated while the skill is in use, with the exception of the MNTIS Shoulder Cannon. Each ability slot also has its own dedicated modifier slot - progressing through Zane's skill trees will unlock modifiers that enhance how their respective ability functions.

Spawn a Digi-Clone of Zane. The Clone stays in place, but distracts and fires at enemies. Pressing the assigned Active Skill button while the Clone is active causes Zane and the Clone to swap places.

Send into battle an automated SNTNL drone that continually flies through the environment and attacks enemies with its Machine Guns. Pressing the assigned Active Skill button while SNTNL is active causes it to attack the enemy under Zane's crosshairs, if any.

Drop a deployable Barrier that blocks incoming projectiles. Zane and his allies can shoot through the Barrier, dealing increased Gun Damage. Pressing the assigned Active Skill button while Barrier is active picks up and holds the Barrier, but the size and bonuses are decreased.

Zane equips a Shoulder Mounted Cannon. Pressing the assigned Active Skill button causes Zane to fire his cannon at his crosshairs and consume one charge. 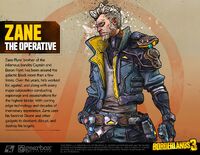 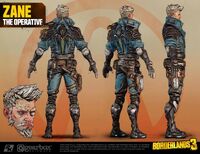 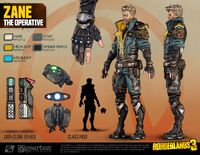 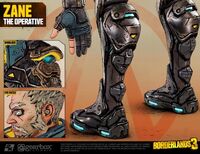 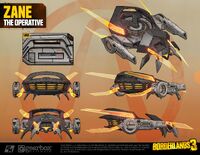 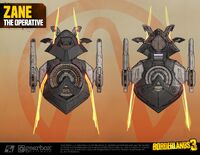