For the CL4P-TP robot of the same name, see Z8N-TP (claptrap).

Z8N-TP is an optional mission in Borderlands: The Pre-Sequel given by the Z8N-TP claptrap. It becomes available after Eye to Eye is complete.

The first obstacle is simply reaching Z8N-TP in order to collect the mission. Z8N-TP is in an isolated chamber adjoining the central shaft of Tycho's Ribs, but there is no way to walk there normally.

The chamber can be reached via a jump pad on the upper ring of the elevator platform just after the Particle Collection Chamber. It can also be accessed by jumping from the elevator closest to it onto one of the floating inner structures. Both methods are risky, and carry the possibility of striking something on the flight through to the robot. Once the mission has been collected another jump pad offers the chance of another risky flight across the chasm.

The objectives to collect the Putti are in Eleseer. In order to do so one must first engage an Opha in combat, charging up the Opha with the desired element for each type of Putti, and then striking it with melee attacks to split off the Putti. This requires that attack types of all four elements be present on a participating Vault Hunter. Eight Putti must be collected in total - two of each kind.

Opha are formidable opponents, able to fire a barrage of small arching projectiles, and able to create Putti that can fire missiles of their own, or restore the Opha's depleted shield.

With the Putti collected, they need to be handed to Z8N-TP, and this requires another treacherous jump back to his chamber. Things don't go quite according to Z8N-TP's plan however, and instead of simply finding enlightenment the robot promptly finds himself surrounded by eight elemental Putti. Each Putti is relatively weak, but each is also resistant to their particular element type. With four of them comes a precedent for bringing several damage types to ensure that there is always at least one that can overcome each resistance. The Putti all cluster around the robot initially, which makes them easy targets from the outset.

"You have helped Z8N-TP reach total enlightenment... or something." 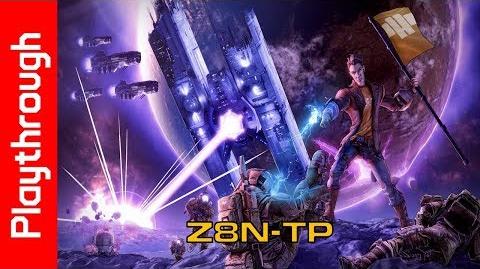