You Can Stop the Music

You Can Stop the Music is an optional mission in Claptastic Voyage given by Claptrap's Consciousness. It becomes available after END OF LINE is complete.

This mission is picked up outside the recycling bin in The Nexus, where Claptrap's Consciousness complains of having an annoying song stuck in his head. He pleads with the Vault Hunters to track it down and kill it, having manifested as a creature called Teh Earworm.

Teh Earworm is found in Cluster 99002 0V3RL00K, and must be beaten three times before it finally succumbs and drops a Music File. Taking this back to The Nexus, the Vault Hunters throw it into the recycling bin and activate it, but Claptrap's Consciousness is dismayed to learn that the file contained his entire music library, not just the offending song. The Vault Hunters successfully stop the deletion process at 99.9%, leaving only dubstep in the library.

The mission is then turned back in to Claptrap's Consciousness, who has already adjusted to the loss of his library, realizing that there's more memory available for dancing now.

Sooo, turns out you are the reason Claptrap only listens to dub-step. *slow clap* 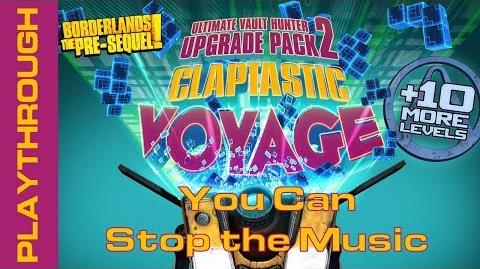 You Can Stop the Music
Retrieved from "https://borderlands.fandom.com/wiki/You_Can_Stop_the_Music?oldid=416723"
Community content is available under CC-BY-SA unless otherwise noted.