This article is about the Borderlands 2 mission. For other uses, see You. Will. Die..

You. Will. Die. (Seriously.) is a mission in Borderlands 2 formed around the sole purpose of slaying Terramorphous the Invincible.

"Patricia Tannis has asked you to kill a really, really, really (really) dangerous thresher named Terramorphous the Invincible. Rumors say that it drops some of the best loot found on Pandora. The rumors also say that you'll almost certainly need a group of four people to vanquish it."

Terramorphous goes through combat phases lasting for fixed periods of time. During such phases, Terramorphous can chase Vault Hunters with melee attacks, or throw spikes. At the start of each phase, Terramorphous relocates to the center of the playing area.

A strong team consists of two Commandos (Axton), one Siren (Maya), and one Gunzerker (Salvador). The Gunzerker fights on the plain, while the Commandos can distract Terramorphous with their turrets. The Siren can revive her allies with the Res and Restoration abilities.

Upon dropping into the arena, there is a rock formation hugging a wall behind and to the right of where Vault Hunters face when dropping in. Standing on this rock will protect characters from Terramorphous, with a spot with room for one person that will offer protection from most tentacles as well. Although this spot works well for one person, two people may fit behind it with good co-ordination between the players. At most three Vault Hunters have been known to fit behind the rock with two at the front and one behind.

There is a small spot on the southern cliff where Terramorphous will be completely unable to harm Vault Hunters, as long as they stay crouched on that spot. However, it can be troublesome to shoot from this location. This spot is best used in a co-op game (particularly useful with two players total), where one Vault Hunter is idle on that spot while any others fight Terramorphous, and even if others died, its health will not regenerate. If a player has two controllers (or is somehow else able to control two characters), this tactic can be considered instead of fighting him solo (should the player only play to kill him).

It is recommended that at least two players use slag and shock weapons to distract Terramorphous, while the other two use either heavy fire weapons or sniper rifles to lower his health.

Solo strategy without the Bee

Though it is confirmed that Zer0 can single-handedly kill Terramorphous by equipping the Bee and Conference Call, this combination is not essential. The Vault Hunter must possess an amplify shield, a damage-enhancing relic or class mod, with ammunition exceeding normal allowance. 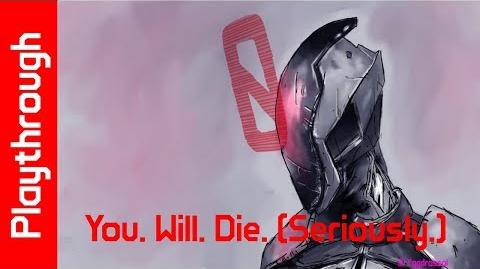 You. Will. Die. (Seriously.)
Français Русский
Community content is available under CC-BY-SA unless otherwise noted.
Advertisement