Wurmwater is an area in Captain Scarlett and Her Pirate's Booty. Once a sea, it has since dried and become a barren expanse of sandy desert bounded by cliffs and dotted with the wrecks of old ships.

The Buccaneer's Bacchanal is a huge sandskiff that is the base of operations for Captain Scarlett and her men. There are various decks at the rear of the vessel, with vending machines and a Catch-A-Ride on the lowest level. There is a Fast Travel terminal on the quarterdeck and a Bounty Board on the middle deck. However, after the mission X Marks begins, Scarlett and her crew will no longer be aboard, due to the fact that Scarlet's crew is killed by the Vault Hunters, and Scarlet herself had to escape in order to avoid death at the vault hunters' hands.

Hegeland Camp is located in a dead-end canyon and is a base for a small group of sand pirates. One weapon chest and a chest with Captain Blade's Manly Man Shield can be found at the far end.

Old Murphy's Canyon is a large bandit camp that takes up the north side of the Wurmwater map. The entrance is accessible by sand-skiff, contains a Catch-a-Ride station, and is lightly guarded by only a few mixed pirate types. Past the Catch-a-Ride, the canyon becomes a dual level collection of bandit structures, with the upper level containing numerous ammo chests, some scattered lockers, a silver chest, and eventually a pirate's chest. The upper level is host to numerous bandits from all pirate types, and two Badasses. The lower level features slightly less enemies, more scattered lockers, and two vending machines.

The "condiment" for the Smells Like Victory side mission is sitting on a table near the pirate's chest on the top level.

Riptide Reef is a small pirate base in the southwest part of the map. One weapon chest, Catch-A-Ride station, and transition point to the Magny's Lighthouse can be found here.

Wurmwater Flats is a large area of a dried up sea bed in the northwest part of the map. On the western edge, there is a small village populated by sand pirates. One weapon chest, Catch-A-Ride station, vending machines, and transition point to Oasis can be found in this area.

Rustyard Corridor is located in the central-east part of the map, and is a fairly strong base of sand pirates protecting the transit point to The Rustyards. One weapon chest can be found sitting right next to the weapons vending machine. Vault Symbol can be found on front of the building with a red boat on its roof.

The Dish is an area in the southeast part of the map access to which is by means of a narrow corridor from the Washburne Fen Catch-A-Ride station. There is number of satellite communication dishes dotted around the area but the most prominent feature is what looks like a large radio telescope or a satellite communication dish laying flat on the ground. Several weapon chests and the Vault Symbol can be found here. Don't Copy That Floppy mission takes place in this area.

Washburne Fen is an area in the southeast part of the map. Its most distinctive feature is a platform high on top of five support pylons. Platform with transition point to the Washburne Refinery can be accessed by means of two service elevator platforms with a diagonal travel. Small contingent of sand pirates augmented by sandskiffs protects Catch-A-Ride station and service elevator platforms. Two pirate weapon chests can be found here. 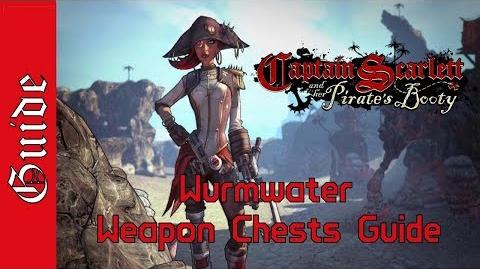 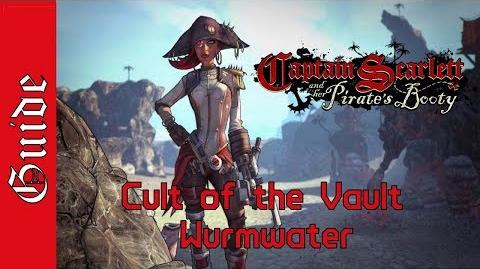 BL2 Wurmwater Cult of the Vault Guide
Retrieved from "https://borderlands.fandom.com/wiki/Wurmwater?oldid=432652"
Community content is available under CC-BY-SA unless otherwise noted.