"Hey. Feel like solvin' a murder? I'm the Marshall around these parts. One of these Gutter quadruplets pulled the trigger on that boy over there. Consider yourself deputized - ask around at Moxxi and Zed's, figure out which one of these identical scum-stains pulled the trigger. Otherwise I'll just have to hang 'em all, and I don't got that kinda time."

A group of people are found standing around the body of Justin Macready. Marshall Friedman speaks, explaining that one of the Gutter quadruplets in front of him killed the dead man. Friedman needs the assistance of an interrogator to determine guilt. Talking to Marshall Friedman, Moxxi, and Zed will reveal information which can be used to deduce which of the four suspects committed the crime. 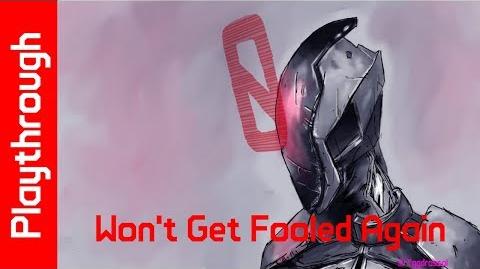 Won't Get Fooled Again
Retrieved from "https://borderlands.fandom.com/wiki/Won%27t_Get_Fooled_Again?oldid=425203"
Community content is available under CC-BY-SA unless otherwise noted.