Wiping the Slate is an optional mission in Borderlands: The Pre-Sequel.

The first stage of the mission takes place in The Meriff's Office where three ECHOs are to be recovered. The first is in a fish tank, and the button to reveal a ladder and access hatch can be found on the side of a map table. The second is in a secret compartment in the study, and this is uncovered by interacting with a book and a subsequent button for the door release. The third ECHO is near the entrance behind a curtain in a slot machine.

Once the ECHOs have been played, the remaining objectives are a simple sequence of item collection and interaction tasks in Concordia.

No harder than killing a man, was it?" 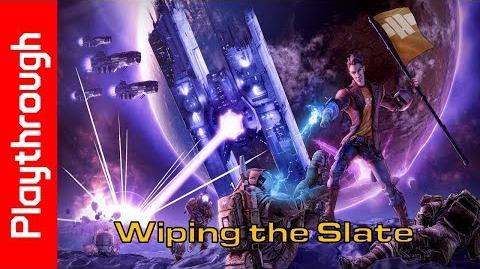 Wiping the Slate
Retrieved from "https://borderlands.fandom.com/wiki/Wiping_the_Slate?oldid=416654"
Community content is available under CC-BY-SA unless otherwise noted.