Winter is a Bloody Business

Winter is a Bloody Business is a side mission in Hatred's Shadow, given by Roland. It becomes available after Dwarven Allies is complete.

Jeffrey can be found near Handsome Bridge beyond numerous knights and orcs. Initially guarded by two bodyguards, he first sends four lesser knights to defend him, then follows this by dispatching Canine and Molehill when the first four fall. Canine is a large knight with a shield and a weapon like a fusion of axe with a mace. Molehill fights using a crude sword of gigantic proportions. Both can inflict serious harm if they get close, although neither are exceptionally fast and can be evaded when they begin to initiate a strike.

Jeffrey, by contrast, is a weak opponent, cowering in fear after the first hit. Additional optional objectives to slap him repeatedly appear when he is struck.

Upon returning to town, Mordecai complains that he didn't understand the references, whereupon Tina obligingly adds another NPC, the Stuffy Aristocrat.

"The night is dark, and full of flatware." 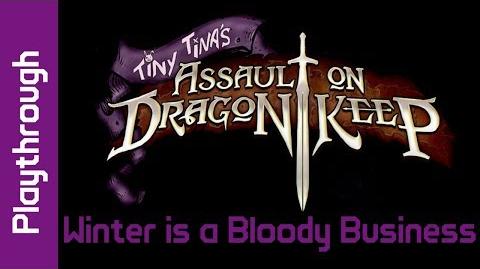 Winter is a Bloody Business
Retrieved from "https://borderlands.fandom.com/wiki/Winter_is_a_Bloody_Business?oldid=458989"
Community content is available under CC-BY-SA unless otherwise noted.