Windshear Waste is the first area seen in Borderlands 2. It is an inhospitable icy wasteland inhabited by bullymongs and one solitary Claptrap.

Claptrap's Place is an icy grotto filled with the detritus of human existence. Hyperion has allegedly used the cave as a dumping ground for everything from old junk to human corpses. There is a Fast Travel station (named Claptrap's Place rather than Windshear Waste) adjacent to the back door, and a weapons chest which provides the starting weapon of each new character entering the game. A cupboard can be opened to reveal a discoverable Vault symbol. In True Vault Hunter Mode and Ultimate Vault Hunter Mode, this also contains an access point for Claptrap's Secret Stash, and a Bank is positioned next to it. The inventories are shared with the ones in Sanctuary.

Frostbite Crevasse is the site of a crashed Hyperion drop barge. The barge is lodged in one side of the crevasse and various bullymong caves have been hollowed out in the crevasse's ice walls. It is here that Knuckle Dragger makes her home. 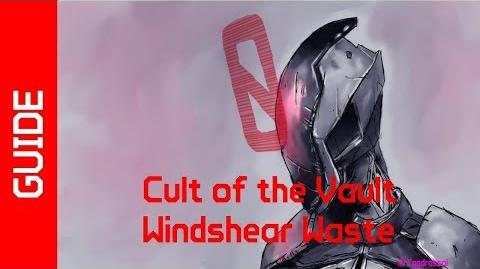