Whoops is the seventh story mission in Captain Scarlett and Her Pirate's Booty.

There are four globs of poly-kryten scattered throughout Washburne Refinery, laid out in a pattern that covers most of the explorable reaches of the complex. These are all easy to locate as they are marked on the HUD.

Loaders of various kinds are stationed throughout the area, so accurate corrosive weapons that can target vulnerable joints are optimal in most cases. The interior conditions range from cramped, to long range, thus ensuring that close range blasting power is also viable in weapon choices.

At the far end of Washburne Refinery is an area designated Carbonslag Crater. Dropping into this area is a one-way jump, the return path being too high to leap back up. Two badass loaders are stationed here and will activate and attack almost as soon as someone drops into the crater. The cover is plentiful however, and provides ample opportunity to block the sight line of one while fighting the other, although there are also a few explosive barrels to avoid.

As soon as both loaders are destroyed, a cutscene announces the arrival of H3RL-E, a giant loader of monolithic proportions that has a barrel launcher mounted high on its back. The barrels have a high arcing trajectory, that is not hard to avoid, and a volatile blast effect. For protection H3RL-E also has a formidable shield. It also has the weaknesses common to smaller loaders however and can be quickly cut down with accurately placed shots to its joints or optic sensor.

Combat against H3RL-E is actually not as daunting as it might seem, due to the ample cover provided by the trucks parked in the area. Keeping close to one of them helps to alleviate the explosive blasts as the trucks provide sufficiently large obstructions to hide behind for lengthy rests. At long range the barrels can also be avoided altogether simply by running ahead of the target zones as the barrels rain down. For weapon choices the same guns that were effective against regular loaders continue to be effective against H3RL-E, but depleting the shield may be expedited with a switch to shock weaponry, or even the high damage output of a rocket launcher which benefits in this case from the size of the target.

Once the last piece of poly-kryten has been collected, the poly-kryten is then returned to Herbert so he can repair his compass piece. Herbert hands over the compass piece once he has finished reassembling it, and at this point an optional objective becomes available. If players opt to give him his gift they soon learn that it was in fact a bomb when they unwittingly carry out Scarlett's hidden agenda to violently rid herself of her admirer.

"Finally! With the last piece repaired and functional, you should be able to reassemble Captain Blade's compass and uncover the location of the Treasure of the Sands."

If the player chooses not to give Herbert his special gift, Scarlett does not comment on the matter, whereas if they give him the gift, Scarlett has much to say. 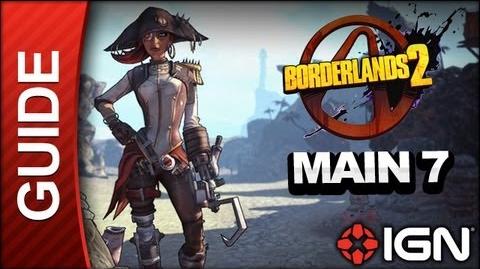