Borderlands Wiki
Register
Don't have an account?
Sign In
Advertisement
in: Article stubs, Borderlands: The Pre-Sequel missions, Side missions

Wherefore Art Thou? is an optional mission in Borderlands: The Pre-Sequel.

Myron's first directive is to find Deidre's ECHO. The echo is on a wrecked Moon Buggy.

Next he asks the vault hunters to go check if she has been taken by local scavs. This leads to the scav hideout nearest it, Banjo Point. All scavs are hostile in the area. Deirdre is in the building directly to the right of the entrance.

Deirdre will explain that Myron is psycho, and will not stop until "she" is dead. She then explains how she has an evil sister who can be killed to trick Myron into believing that Deirdre herself has been killed.

Bringing a Moon Buggy is strongly recommended for killing Maureen, for she attempts to flee in one of her own. This does not prevent her from striking back however, and her moon buggy is equipped with a missile pod which can be deadly to anyone hit by it. The missiles can be evaded at high speed, and they also cannot hit targets at very close range. It may be necessary to hit and run to recover from them.

"Thanks for killing my psycho sister I can sleep easier knowing her and Myron aren't around anymore." 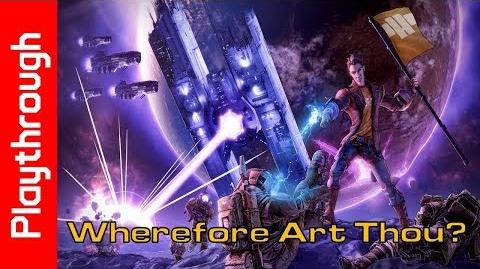 Wherefore Art Thou?
Community content is available under CC-BY-SA unless otherwise noted.
Advertisement