Where Angels Fear to Tread

Where Angels Fear to Tread is a story mission in Borderlands 2 given by Roland. The mission is performed, starting at Sanctuary and continuing in Thousand Cuts, The Bunker and Control Core Angel locations.

"Angel is going to give you Handsome Jack, but only if you deactivate her first."

Preparation of strong corrosive weapons and a moderately powerful shock weapon would be advisable, as almost all enemies encountered during this mission are armored foes with shielded Hyperion soldiers and surveyors. The only flesh targets are Hyperion snipers.

The first objective is to meet with Claptrap in Sanctuary and convince him to help in the fight with Handsome Jack. Follow into the Thousand Cuts, break through the attacking Hyperion forces, talk to the Claptrap and it leads the way through the "Container Containment Field". It will deactivate the field and allow the Vault Hunters to proceed.

The hill climb beyond the Containment Field is guarded by Hyperion personnel and loaders, with some automated gun turrets and air support from surveyors. Arrayed against them, Slab Support Buzzards also provide some air cover of their own. While not overly dangerous to the Hyperion force, the buzzards do present a distraction to help reduce fire on the Vault Hunters. At the end of the hill before the left turn, a constructor will always appear, and must be destroyed to proceed. When the gate opens, several Hyperion Soldiers will spawn.

Further up the hill, Hyperion commences a mortar bombardment, which Brick will warn the Vault Hunters of as the shells drop. The next gate can be opened by destroying the two turrets attached to both sides of it. At this point, more Hyperion loaders will appear, as well as more Hyperion soldiers and potentially a Hyperion sniper. The last barricade can be lifted by destroying the badass constructor, which should not be tough with the ample cover nearby. Vault Hunters should clear out the other enemies to prevent either them or the constructor from easily crippling them. After the badass constructor is destroyed, three more Hyperion soldiers will appear, which can be then dispatched with ease. The Bunker is straight ahead, while to the right is an empty area containing multiple Hyperion chests.

Upon entering The Bunker, Brick instructs the Vault Hunters to destroy the autocannons. A total of twelve must be taken down. These armored guns unleash strong bursts of heavy damage, though they usually target the buzzards instead and have easily accessible critical hit locations behind them. After the first is destroyed, loaders will begin spawning (only EXP, JET, GUN, and HOT loaders will appear) constantly. Destroying the autocannons will also result in the laser countermeasure activating for approximately 5~10 seconds, dealing damage when it comes into contact with the Vault Hunters. Lasers are not installed on the staircase as well as the lower levels. Alternatively, Vault Hunters can utilize elevated locations to avoid the lasers.

Brick's buzzards will occasionally drop ammo and health vials, and Brick will inform the Vault Hunters about the drops' location and type when this happens.

When the autocannons are destroyed, Handsome Jack reveals the real bunker, a giant robotic aircraft called the BNK3R. It is an armored target with the following attacks:

BNK3R soars around the arena from a distance and will only close in at fixed intervals, meaning that unless it is stationary, where most of its dangerous attacks are unleashed, it is practically invincible. While cruising, it will throw mortar shells. The rest of the attacks are only utilized when it strafes the Vault Hunters from either the left or the right side of the arena. When its health is extremely low, it will instead fly to the front of the area and stay there until defeated.

BNK3R has two readily accessible critical hit locations: A camera at the chin, and a cluster of optics in its front. Both are exposed for the entire duration of its strafing session, though dodging its attacks can be tricky in that case. Weapons that trade accuracy for power, such as shotguns, will be able to inflict significant damage even from the top area, where protection is offered against almost all of its attacks for most of the fight. Vault Hunters should mostly stay there unless their ammunition is running low, in which case a quick run through the supplies dropped by the Slabs or from ammo crates will keep the fight up for a little longer. Vendors are also available at the bottom of the structure, at the entrance to the map. This location is a good spot to both recover health and attack from, as mortars usually fall short of the railing, and loaders rarely venture down below the ring around the central platform.

Once BNK3R is defeated, it will flinch in mid-air for a few seconds, then crash and drop loot. The barrier blocking access to Control Core Angel as well as to a Hyperion chest at the back of the area will be both deactivated. As ammunition supply is not plentiful in the next fight, Vault Hunters might consider restocking, as well as selling excess loot from the boss.

Control Core Angel lies deep within the Hyperion installation and is reached by a deep elevator shaft. Angel remains captive in the middle of the expansive chamber, and asks that the three Eridium injectors be destroyed. The injectors are soon revealed to be shielded and further protected by stationary turrets digistructed from overhead supports, Shock Field Generators on the floor that deal damage in lightning discharges, and waves of loaders. The shock field generators are armored (despite the red health bar) and can be easily destroyed via gunfire, after which they do not respawn. The ironclad core defense turrets do devastating incendiary damage and should be taken out quickly before they inflict serious harm. Loaders, on the other hand, are the main sources of damage and the primary opponents within the area. The loaders that appear will consist of Angelic Guards, GUN, ION, SGT, WAR, and badass loaders.

The floor of the chamber presents a dangerous place to fight with all of these hazards but also provides room to move and dodge. The only source of cover is the dome where Angel is kept captive – it separates the arenas into a ring and can be utilized to block most attacks. At various stages, Angel will also summon ammunition crates, and restock the oldest ones. The ledge at the door is a much safer place to fight, and much of the damage from the loaders can be avoided by crouching, but the drawback to remaining in this position is the lack of ammunition resupply.

Roland enters the chamber soon after the fighting starts and proceeds to disable the shields protecting the injectors. At later stages, he also deploys his Scorpio Turret and helps with the actual fighting. Lilith, against all advice, also teleports in to join the fight. Once the pair of them are fully engaged, the fighting becomes easier, although tougher enemies will appear during the closing stages of the fight. When Roland disables a shield, Vault Hunters should keep their distance from the injector before destroying it as the resulting liquid flow can slag them, though this does not affect Roland, Lilith, or an enemy.

"Angel is dead, and the Crimson Raiders are in possession of the Vault Key. It's time to take down Handsome Jack." 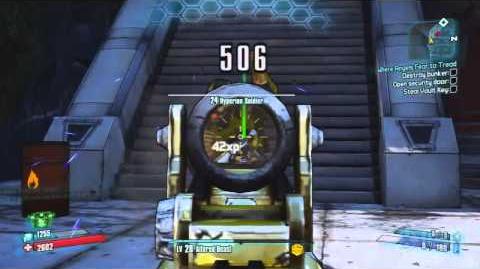 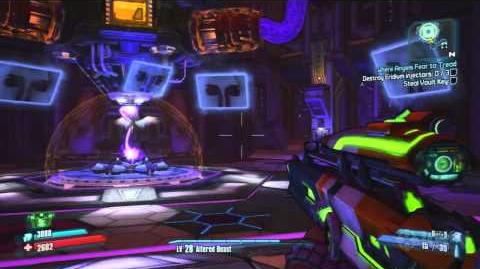 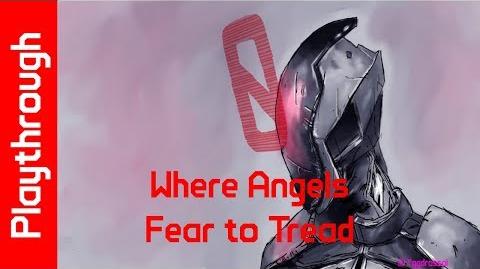 Where Angels Fear to Tread
Retrieved from "https://borderlands.fandom.com/wiki/Where_Angels_Fear_to_Tread?oldid=486616"
Community content is available under CC-BY-SA unless otherwise noted.