Welcome to Helios is the first story mission in Borderlands: The Pre-Sequel.

After the introduction movie, the Vault Hunters slowly rise and are welcomed by a CL4P-TP unit that hands over an ECHO device. This initializes the HUD, with the exception of shields, grenades, and oxygen in the case of a normal mode game. New characters start with two common-quality weapons in their inventory, as well as a Personal ECHO device with details about their background.

The room must then be cleared of hostiles, when this has been accomplished, Jack asks to be helped up, which can be done by reviving him like a fellow Vault Hunter in a multiplayer game.

After Jack has been revived, the mission can be turned in. The reward is a shield module; new characters automatically equip it and have their shield module activate in their ECHO device.

"You found Jack, and you saved him. Now for extra credit, save Helios from the invasion. 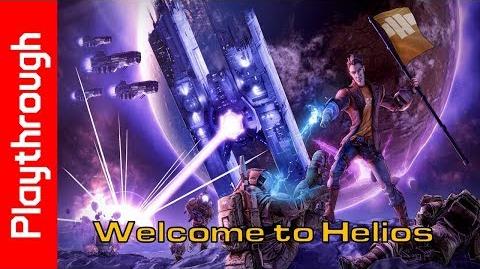 Welcome to Helios
Retrieved from "https://borderlands.fandom.com/wiki/Welcome_to_Helios?oldid=432948"
Community content is available under CC-BY-SA unless otherwise noted.