Watch Your Step is the tenth story mission in Borderlands: The Pre-Sequel.

As the force field has been deactivated, it is now possible to proceed through the Veins of Helios to the laser. Lost Legion soldiers may appear near the console required to reveal the exit, including one Badass.

Upon entering Veins of Helios, the Vault Hunter is confronted with a new type of enemy: the Infected (or Boils). They are exclusively flesh enemies with decent health and may be equipped with weak shields. Fast and agile, they can dish out great damage easily. Generally, they are not tough to tackle individually but they often appear in large groups or in the heat of a firefight. Cryo weapons are advisable in freezing them and to neutralize their advantages. In addition to them, Lost Legion soldiers populate the area too, but they are hostile to the Infected, which can be taken advantage of in certain circumstances. Note that the Infected don't appear in oxygen-depleted areas.

After proceeding forward when Jack ordered a worker bot to create a bridge, there will be a small Lost Legion outpost. Past it, the Vault Hunter should turn right and head in the direction of central maintenance. The jump pads nearby can help in this task.

Central maintenance is crowded with Infected and Lost Legion soldiers. Thus it is ill-advised to stay there for long, and the character must quickly find the nearest passage to the objective. However, as they approach, Colonel Zarpedon destroys it. Jack tells the Vault Hunter to destroy the plasma regulators in order to proceed. This is a simple task as even within the higher floors of the reactors, it is possible to destroy the regulators from a distance without having to confront the Lost Legion soldiers there. When this is done, the character can activate a console to alert Jack, and then find their way to Lunar Launching Station.

Lunar Launching Station is a mixed combination of indoor & outdoor areas, with many more Lost Legion soldiers and occasionally powersuits. Jetpack soldiers as well as snipers are a common sight, and Badass enemies are likely to appear around too. There are various explosive energy capsules scattered around the map. When armed, the capsule turns red and creates a devastating explosion to everything nearby when shot, before entering a recharge period during which it is not responsive. Although powerful, it's not advisable to use them against enemies due to them being static.

To complete the optional objective, a Loader always spawns upon entry of Lunar Launching Station and has to be interacted with. This must be done before the character accesses the console that allows for further access into the map. Then, they must go to the command center, turn on the fast travel station, and attempt to shut down the laser. The laser deactivation fails, but the mission is completed can be turned in to Jack.

Deactivate the Eye of Helios.

Remote deactivation being a no-go, looks like you're going to have do it manually. 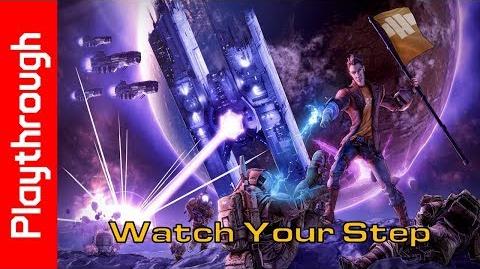 Watch Your Step
Retrieved from "https://borderlands.fandom.com/wiki/Watch_Your_Step?oldid=472988"
Community content is available under CC-BY-SA unless otherwise noted.