Washburne Refinery is a location in Captain Scarlett and Her Pirate's Booty DLC in Borderlands 2. It is used by the Hyperion Corporation as an Eridium refinery.

The office space and residence of C3n50r807, a Hyperion loader obsessed with censorship.

It is a long corridor with rails for the wagon. Serves to transport the eridium from one part of the plant to another. A Badass Loader can be found on one end of the Arm while a JNK Loader is located on the other end.

A large sky-lit area used for constructing the automated workers that drive the facility. On each side is three openings which each contain a digistruct pole. These can produce various kinds of loaders, including EXP, GUN, BUL, PWR, and the DLC1 exclusive ARR Loaders. Another Badass Loader can be encountered in this area.

The Forge Array is a curved corridor which houses three pools of partially refined eridium. This area contains a large amount of Loaders, and also a Cult of the Vault symbol.

Lair of the Lecher-Bot is a small area past the Forge Array and is where P3RV-E can be found. There is one weapon chest here, and the Vault Symbol can be found in a room just to the north.

Carbonslag Crater is an open-air area used for the transportation of refined eridium to other areas of Pandora. Two Badass Loaders will emerge once entering. After killing these, one can fight H3RL-E.

It is factory yard and the arena of Hyperius the Invincible. The entrance on the arena costs 8 Eridium. 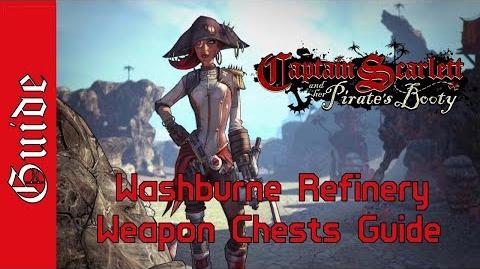 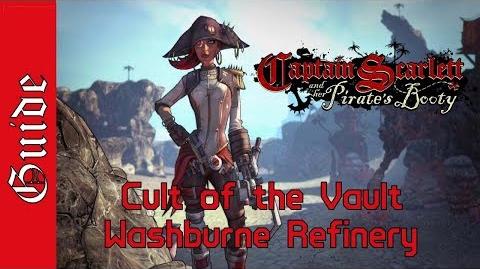 BL2 Washburne Refinery Cult of the Vault Guide
Retrieved from "https://borderlands.fandom.com/wiki/Washburne_Refinery?oldid=432653"
Community content is available under CC-BY-SA unless otherwise noted.