Walking the Dog is an optional mission in Mr. Torgue's Campaign of Carnage given by Tiny Tina.

Tina just bought  a new puppy named Enrique and she wants help with walking it. She insists that this will help with training for the arena as well.

Enrique can be found at the first waypoint in a cage. When the cage is opened, the skag will give chase. He will follow at quite a range, but may wander if his target gets too far away. His attention can then be reacquired by shooting near him, and this is alluded to by Tina's ECHO transmissions.

Enrique must be led around his various waypoints, and protected from various attacking enemies. At the final objective he will collapse into a deep slumber.

"Tina's puppy went for a walk, and you got some much needed cardio exercise. A good day all around. 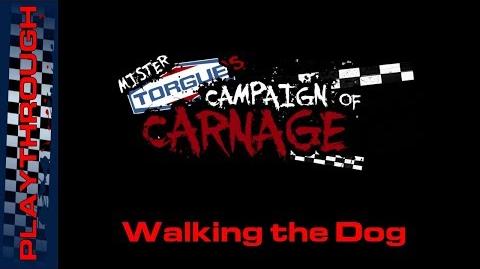 Walking the Dog
Retrieved from "https://borderlands.fandom.com/wiki/Walking_the_Dog?oldid=431249"
Community content is available under CC-BY-SA unless otherwise noted.