Vladof is a weapon manufacturer in Borderlands, Borderlands 2, Borderlands: The Pre-Sequel and Borderlands 3. Vladof weapons tend to have lower accuracy but also have an extremely high rate of fire compared to other guns of similar level rating. Their firearms can often be identified by an orange/brown finish, with grey or white accents. They follow a Russian and East European themed naming scheme.

The following are made by Vladof in Borderlands.

Vladof weapons tend to have a higher rate of fire than any other manufacturer. Vladof weapons with multiple barrels sometimes feature increasing fire rates as the trigger is held.

Vladof launchers can have the special ability "reduced ammo consumption", which means that every third shot fired is not deducted from either the magazine or the player's ammo stock. This is coupled with lower base damage, though the overall destructive capacity of the weapon remains roughly the same as an equivalent launcher from most other manufacturers.

The reduced ammo consumption effect appears to dominate the increased ammo consumption of E-tech weapons, and interacts strangely with character skill or class mod properties that adjust magazine size. Launchers will sometimes reach zero rounds in the magazine and fail to reload automatically, and switching weapons while a 'ghost round' is in the launcher's chamber will sometimes outright prevent ammo consumption on the other weapon until the character again uses a Vladof launcher to restore normal ammunition behavior. It is possible that the Vladof launcher's mechanism has less to do with providing a free round after two normal shots, and more to do with firing two-thirds of a rocket per shot. The bugs may simply be the result of the game not responding properly to fractional bullet counts.

Blue and purple Vladof sniper rifles spawn with drum magazines, which can increase the clip size to usually 12 rounds, and in rare cases upwards of 20 rounds, making them the highest capacity sniper rifles in the game.

The following are items made by Vladof in Borderlands 2.

Stalker's skin is that of a purple Vladof weapon. 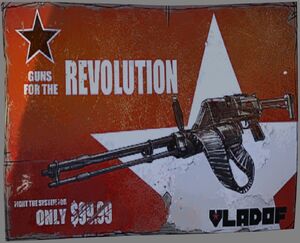 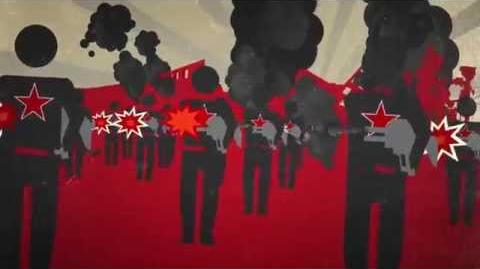 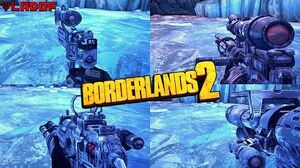 In addition to their full range of common pistols, assault rifles, sniper rifles, and rocket launchers, Vladof products in The Pre-Sequel include items listed below.

Weapon prefixes remain generally the same as in Borderlands 2 with slag weapons being replaced with cryo weapons. Weapons without weapon accessory but with cryo elemental capacitor have prefixes listed below.

Only exception to this are rocket launchers with Bandit grip which always receive the Revolt prefix even with elemental capacitor present.

The company's main gimmick has remained unchanged, keeping the signature high fire-rate on all weapons but now have the gimmick of having a secondary weapon attached to the main weapon.

Vladof weapons have various underbarrel attachments that offer a different way of dealing damage. On assault and sniper rifles switching modes is represented by rotating the barrel so that the currently active option is on top – with exception of the bipod attachment.