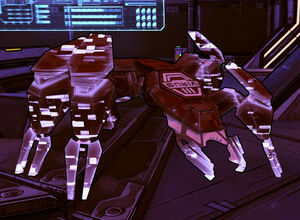 Viruses are invasive bits of code which have infected Claptrap's mind in the Claptastic Voyage DLC of Borderlands: The Pre-Sequel. They are found throughout the DLC areas.

They have a very insect-like appearance closely to that of a scorpion (minus the arm pincers), with large pincers on their heads, a forked tail, and four legs. They helpfully have the word "Virus" imprinted on their heads.

If attacked with an elemental weapon for an extended time, the virus with gain the elemental attack of whatever they were hit by, becoming a even bigger threat. The effect does wear off after some time to which the virus will attack normally. Using shock or incendiary weapons is not recommended as viruses embued with those elements can quickly cripple the Vault Hunter.