I want that rifle, Daddy! – Fires 3 projectiles at the cost of 2 bullets in a horizontally linear spread. When zoomed, fires a five-round burst of the same pattern, but each group gets progressively tighter towards the center bullet - the first group of the burst is the same as if hip-fired; the fifth is very close to centered.

As with all Dahl weapons in Borderlands 2, the Veruc has burst fire when zoomed. However, the special effect's spread is influenced by whether the user is zoomed or not. When zoomed, the spread reduces with every round fired, ending with all three bullets hitting the same spot on the last shot in the burst.

Due to this, it is surprisingly effective at dealing with charging targets, or enemies that are otherwise in close range, as all three projectiles will strike the target. It's still worth noting though, that the Veruc still possesses the accuracy and burst-fire mode of other Dahl rifles. Thus, it still retains its usefulness at medium range as would a normal assault rifle, due to the center projectile still flying straight versus the left and right projectiles.

The Veruc's spread also has a tendency to, at certain ranges, hit three critical hit points of the more common loader variants - both arm joints and the eye - simultaneously. 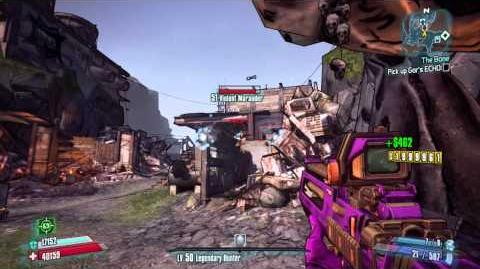 Borderlands 2 - How to Farm Lyuda and Varuc (Under a minute)
How to get Veruc
Français Русский Українська
Community content is available under CC-BY-SA unless otherwise noted.
Advertisement