Vermivorous the Invincible, with the alternative alias of Supreme Badass Varkid, is the ultimate evolutionary stage of varkids. She possesses unmatched statistics, rivaling even those of raid bosses.

Vermivorous only spawns in True Vault Hunter mode and higher difficulties in all of her appearances.

Vermivorous has more health than Terramorphous the Invincible, but since the fight does not restrict use of cover, buying equipment, or respawning (as long as someone keeps her attention in multiplayer), no special strategy is needed. However, due to the incredibly low evolution rate, significantly more time will be spent trying to spawn the raid boss than fighting her.

Vermivorous is similar to a regular Ultimate Badass Varkid, though she is stronger. She can launch a barrage of corrosive balls, summon small explosive varkids which tracks the target (these can be shot for Second Winds), and stomp targets in close proximity. Vermivorous can also fly, though she has no clear preference between ground and air. Like the Badass Varkid, she can perform a charging attack when on the ground but with increased velocity, but unlike the Super Badass Varkid, it cannot burrow.

Areas in which large numbers of varkids are found are ideal for getting Vermivorous to spawn. Varkids can be found in abundance within the Caustic Caverns and the Tundra Express - Farmhouse, both of them with convenient Fast Travel stations near the varkid spawn areas. It is also possible for the Ultimate Badass Varkid that spawns in the Creature Slaughter Dome transform into her, but this requires the corresponding DLC and for the stages to be failed repeatedly.

The first area of the Caustic Caverns contains a large group of varkids that continuously spawn. It is possible to get these varkids to attack nearby crystalisks, allowing varkid evolution to be safely observed. Additionally, as varkids do poorly at attacking crystalisks (they only hit the crystalisk's body and not the legs, which in turn inflicts almost no damage), the crystalisks are able to distract the varkids for extended periods, making the fight incredibly easy.

The Tundra Express Farmhouse provides another area with large numbers of varkids. As the varkids cannot enter the farmhouse, cover can be taken inside, although the projectiles of a Badass Varkid can still hit. Apart from several buzzards that appear after some time, it is also easier for varkids to leave combat and become inactive.

There are three ways to instantly kill Vermivorous: The first is to lure it in front of the train running through Tundra Express, which kills it upon impact. The second way is in Caustic Caverns near the first fast travel station. If the first set of doors are closed while Vermivorus is standing near them and they are opened immediately after, she will be killed. The third and final way is with Zer0's B0re skill, although this also only works in Caustic Caverns as it requires crystalisks. If Vermivorous is attacking a crystalisk, it is possible to bounce a bullet off the crystalisk's leg into Vermivorous. This requires a gun whose bullets naturally bounce off surfaces, such as the Stinger or the Stalker, since B0re bypasses regular bullet deflection on crystalisks. If done properly, B0re will activate, and combined with the massive bonus of a critical hit, Vermivorous will be easily killed.

Vermivorous appears alongside Hemovorous the Invincible in the Director's Cut DLC and only appears while playing on Mayhem Mode or True Vault Hunter Mode. She is no different from Hemovorous but spawns with it simultaneously.
For more information on this incarnation of Vermivorous, see You. Will. Die. (Over and Over). 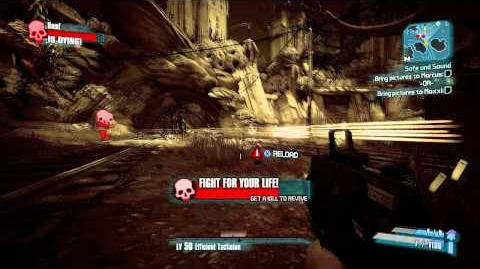