A Vending Machine is an equipment dispenser used to obtain new weapons, gear and ammo, and for selling unwanted or extra weapons and equipment. Vending machines are located strategically throughout the game and are available in each zone. Depending on the size of the zone there may be multiple locations. Sub-zones usually have vending machines located right at the transition point. Ammo and Med Vendors are also often found just prior to encounters with major story arc bosses, allowing the opportunity to resupply before a big fight. Vending machines are often referred to as 'vendors'.

All vending machines change items for sale every 20 minutes of real time (although for some reason the inventories actually reset with about 30 seconds left; this is fixed in Borderlands 2). Each machine offers an "Item Of The Day", which is often a rarer and more powerful item than regular stock, at an inflated price. Very rarely, the Item Of The Day will be a legendary item. In Borderlands: The Pre-Sequel, the Item of the Day can be a Unique.

As the Vault Hunters progress through Pandora, the vendors offer higher level items in higher level areas. The item level of a vending machine is tied to the level of the zone and will not increase above a preset level.

Every time a player accesses a vending machine a recorded voice announcement will broadcast from it, advertising various advantages of the various types of items that can be bought.

When accessing a machine, three options are presented: Buy, Sell, and Buyback. In addition all item lists are sortable by: all, type, brands, items.

The Buyback Option stores the 20 most recently sold items until the player leaves the zone or quits the game. 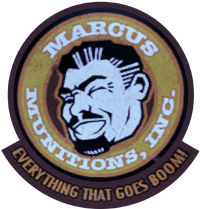 Weapon Vending Machines, or "weapon vendors", are provided by Marcus Kincaid and sell only weapons. Those vendors are marked as "$" (dollar sign) on the map and sport a burgundy and gold color scheme and are boldly emblazoned "MARCUS Munitions, Inc." They can be found across Pandora and stock a random, level-based stock of munitions.

In Borderlands: The Pre-Sequel, weapon vendors have dark-red color scheme, are emblazoned Guns in Space and YOU WON'T NEED TO HEAR 'EM SCREAM! slogan.

In Borderlands 3, weapon vendors are provided by Marcus Kincaid once again and only sells weapons. Weapon vendors are marked as a "$" (dollar sign) on a yellow tall rectanglar border on the map and spots a dark-purple colour scheme and are emblazoned GUN$ and has the words "MARCUS Munitions, Inc" with the logo at the bottom left on the weapon vendors. The mascot is a bullet wearing a tan helmet, white gloves and black boots. The mascot is saluting while holding a assault rifle in a upper position on his right hand. At the top of the weapon vendor is a small orange/gold background with a variety of weapons scrolling left and right, stars going up and down, and with the words GUNS scrolling. 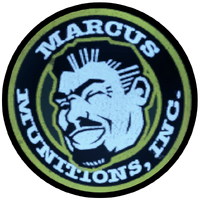 Ammunition Vending Machines, or "ammo vendors", are also provided by Marcus Kincaid and offer every type of ammunition as well as SDUs to increase the maximum amount of ammunition a character can carry. Those vendors are marked as "$" (dollar sign) on the map. The machines sport a green and white color scheme and are boldly emblazoned "MARCUS Munitions, Inc."

In Borderlands: The Pre-Sequel, ammunition vendors have green color scheme, are emblazoned BULLETS Etc. and GOOD TO THE LAST SHOT slogan. 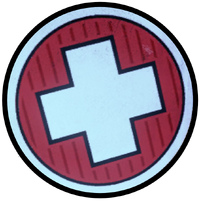 Medical Vending Machines, or "med vendors", are operated and maintained by Dr. Zed and offer several helpful items for sale. The machines sport a red, white and blue color scheme. They are boldly emblazoned with Dr. Zed's face and the label "dr. Zed: come get your fix today!". Med vendors are indicated on the game map by a green cross symbol. Most med vendors are in open areas like outposts, however some are in safe areas such as the one in New Haven outside Dr. Zed's clinic. In the Zombie Island of Dr. Ned, the med vendors around Jakobs Cove have a mustache drawn on Dr. Zed's face and a 'N' is taped over the 'Z' to make them say Dr. Ned. These vending machines also broadcast different voice messages.

In Borderlands: The Pre-Sequel, med vendors are operated and maintained by Nurse Nina. They have white and red color scheme, are emblazoned with Nurse Nina's poster, HEALZ! and HURTS SO GOOD! slogan.

In Borderlands 3, med vendors are operated and maintained by Dr. Zed this time around and offers shields, class mods and insta-health. Med vendors are marked as a "+" (plus sign) on a red tall rectanglar border on the map and spots a dark-red/maroon colour scheme and are emblazoned DR. ZED'S MEDS and has the words "ZED'S MEDS" with the logo at the bottom left on the med vendors. The mascot is a pill which is a nurse wearing a white nurse cap with a red plus sign on the middle, blonde hair poking out, white gloves, a pink uniform, a white shirt underneath and dark red heels. The mascot is holding a syringe on her left hand with a needle poking out on the top and blood drops flowing on the end of the needle. At the top of the med vendor is a small pink/red background with three red hearts beating and a blue vital sign moving up and down. 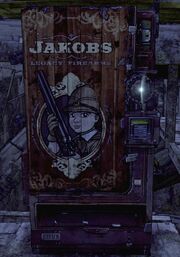 The Jakobs Vending Machine is vending machine exclusive to Borderlands. It is located in Jakobs Cove and becomes available after completing several key missions. It is unique in that it is the only machine of its kind. It sports Jakobs Company color scheme, of brown and gold, and is boldly emblazoned JAKOBS Legacy Firearms, and pictures a child wearing a pith helmet and holding a large caliber double-barrelled rifle.

When the machine is accessed the announcement made is in a different voice than Marcus'.

Since the Borderlands Game Of The Year Enhanced edition, it only sales Jakobs weapons and this vending machine is available always.

It is also unique in that it offers class mods for sale as well. 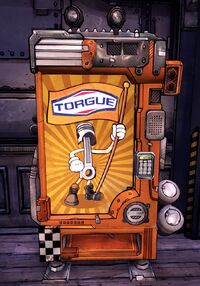 The Torgue Token Vendors are vending machines exclusive to Mr. Torgue's Campaign of Carnage DLC. The machines sport a bright yellow and orange color scheme and are boldly emblazoned with Torgue logo. These vendors are operated and maintained by the Torgue Corporation. Only Torgue-branded weapons and items are offered and Torgue Tokens are the only means of payment accepted. Item of The Day is always of legendary rarity. Having in mind how difficult it is to acquire these tokens, price tag (615 TT, regardless of the game mode) on these items is almost prohibitively high. Furthermore, Torgue Token Vendors only sell Torgue-branded items and do not accept unwanted or extra weapons and equipment Vault Hunters might have for sale. 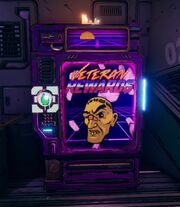 The Veteran Rewards Vendor is a vending machine that sits outside Crazy Earl's place on Sanctuary III. The machine is purple in color with a 90's Neon theme and Earl's face featuring prominently. This vendor is operated and maintained by Crazy Earl, and items can only be bought with Eridium. Only anointed common items up to Epic rarity and primary mission rewards will be sold (legendary mission rewards such as the Red Suit and Sellout can be sold, but not the Cloud Kill). The Item of the Day is frequently a mission reward weapon if one is available. Items cannot be sold to this vendor. 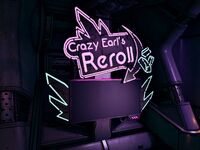 Reroll Machine sits outside Crazy Earl's shop on Sanactuary III. For a nominal fee of 250 Eridium, anointed items can be "rerolled" to receive desired or more useful anoint. Only anointed items are accepted.