That you keep that weapon to yourself? I wish to see them remain as rare as they are now.  nagy   talk

If you mean the rare weapon that we just got, no problem, I will keep it for myself and myself only. Just checked in gear calc, its damn good gun... i mean, almost perfect dmg, almost perfect accuracy, and sight_5. I believe chances to get one of these is 1:10000... but We got it from Craw xD!!! :o

I just checked my Reaper, and it's a perfect variant. barrel4 has more damage than barrel5. Also, you may want to update the drama level.  nagy   talk

I just <3 that Reaper :) and by perfect variant, I generally meant on action5 (action4 has more dmg than action5) and wut you mean by your reaper, we found it together, no?..oh well...

As for the drama lvl, will do that in few hrs, depending on how many more edits that Forum page gets... and how many flames...

Actually I said "my" cause I opened up my save to check if my new elemental SMG has the twisted barrel so I checked my *instance* of the Reaper. Eh, action4 too? Damn ok.  nagy   talk

Hey Zaph, you still up for archiving the rest of the Watercooler? I'll do it if you don't want to :) Just asking to avoid edit conflict. Or actual conflict.   Bukkithead

Feel free to mark up Watercooler, i rest my case on that mission... ;)

I like the DRT-Y gun. If you were so inclined, raising the fire rate on it a bit would make it more "legendary" without it being overpowered, really. Harry was a fast shot, too. Maybe 1.9 or something? Sorry, just bored and being nosey.GT: ConceitedJarrad XBOX360 19:24, September 19, 2010 (UTC)

How do you get coloured text? like for legendary weapons ideas and coloured links? BLObOrt 11:31, September 26, 2010 (UTC)

I am very interested in modding, and by modding i mean not making hax-guns, but adding a new content to a game. Would you kindly provide some info on how to make new parts/materials and change their properties - from how to open game resources to how to add new parts and pack them back so the game could use them. I would also be very happy to know how to add custom materials with altered paintjobs (as you did with Torgue Hansel).

was memadeit's doing. nohara was the one who said it was about time he got to kill faeries (winged). unclear if that was your intended reference?   Dr. F

That whole thread is filled with sick (good) humor, but it was Nohara's post that I was referring to, and that made me almost smother myself laughing when I first red it

Zaph, you know that it's MMI's thread, right?  nagy   talk

Yes I do; as said above, that whole thread (altogether with MMI's & Skeve's posts) is damn hilarious, but it was Nohara's post that made me roflmao... literally

I would very much like a picture of your ass physically detached from your person.  nagy   talk

Hi Zaph. What's a "SKYPE PHONE NUMBER THING?" I can't figure out what you changed... according to my userpage history, it says you changed something, but comparing the revisions proves nothing... Just wondering.

Also, I suggest changing the Drama level to a 5 or something, we got hit HARD by vandals. BIG thanks to Nagy for fixing them all   Uberorb

, and that annoys me alot, so whenever I see that I add spaces... As for the Drama, I will start making Drama_lvl_5 picture right away!

Tell him to contact Skype if it gets on his nerves.  nagy   talk

Only just realised that there's been 2 prefixes waiting to go into the list for almost a month... don't know how I missed those.

May have something to do with my period away from internet.

I guess I should be more specific.

Something like a Gearbox Shotgun. Barrel5, Mag5, Level 61. Do whatever else you want. And named something like The Toaster, with perhaps a red text of "Dude..."

Are these weapons actually usable in game?

I couldn't edit yesterday... probably due to some kind of wikia maintenance or something similar, I wanted to ask you to post something more specific, and thank you good sir for reading my mind in the time of need! xD

The Toaster gun is on it's way, it will have desired Weapon Manufacturer, and parts, as well as the red flavor text.

And yes, these weapons can be usable in game; in addition, in case you played on PC I would try and post changed game files somewhere so you can download them, but you're on Xbox360 I assume... cant help you there (cant change crucial game files there), sorry. Thanks for contacting, yours sincerely, Residential modder man a.k.a

Even if it's possible, which it is, there's no way in hell that he or you are going to post it on here.  nagy   talk

There will be no WT code leaks for stock or any other Overpowered guns by me... you can ask someone else, or not ask at all.

As for "I'd like to see what one of those does as well." ; The Grenade deals 0 damage, but instantly kills every hostile creature nearby. Approved by

Oh brother where art thou...

We miss you. I even got a sig and you're not around to see it.

Hi Zaph, I've seen what you've done with the Splash type things for uberorb, Dr. F and yourself, and I would like for you to make me one based on nine toes as I think that it would be cool to have something like that on my userpage

It's on its way! Thanks for contacting me :) Approved by

thanks for saying yes to that request, if only there were something I could do in return.

I looked at several users pages, including yours, when i was learning the code for boxes to get some ideas and to try not to copy anybody else too much. I like to be original.

I myself learned "userbox code" from few other wiki's and wikia's, and I have been "stealing" them in the beginning... But once you get to know the code, making them is easy as pie... or should I say, easy as shooting a Skag in the back! xD I'll post links to some other wikia's and userboxes tomorrow, also, there's something I need you to do for me, involving wiki code, userboxes, and you... but I'll also tell u that tomorrow.

As far as wiki code goes, i am still a noob. I am trying to learn, but am still a beginner. If it is within my knowledge, I would be happy to help.

Well Veggienater, I want You to be creative and make some funny userboxes for my userpage as I'll do "Userpage Overhaul" in a few days. In return, you'll get a nice present! :D Approved by

Fair enough! Anything you are looking for in particular? Any particular pics you want me to use? I did not get to know you very well before your "vacation", so im not sure what you would like. I have a bunch of unique boxes on my user page, if you have not looked already, for ideas.

To be on the Surgical Strike Cleaning Crew. Check the forums.

Hey zaph, Dr.F said that I need you for something. Can you go here and join channel #wikia-bl please? use any nickname

(link removed for security)<- is the closest thing I can find. It's a little 2 cheezy though, but you get the idea.

I have been sidetracked by liaison stuff, but I did find more pics. Most notably, (link removed for security)<- that one which is VERY close. see, I am not making you do ALL the work :p

The one you did for Uberorb is awesomeClick for inventory!

Well, I have been busy... LOL, I think I am going about it the long way but I have 2 pics now that just need merged into 1 and kinda hit a wall. Oh well, I have spent too many hours to give up now.

Just to give you a bump to the wiki:

What do you think of the "VEG NATER"? 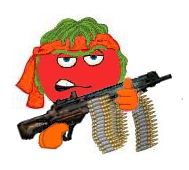 Glad you've got it sorted out, but then again, sorry of inconvenience.

The more I did, the easier it got... guess that is the way of things :D

Its actually been a long while now... just trying to tease you back to the wiki...

Hurr Durr! I'll probably get the status of some... random lurker, as I only come to see wut's goin' on every now and then... I'm not providing much help, huh? :(

Add this to your profile.

who rolled the rock away from the haxxor cave? welcome back, mate. now get out and push!

I guess the time did it... my "hibernation" had to end, I'm glad it ended in this lifetime. :) So.. getting ready for BDL2 (trailer's out, yey!), gonna beat BDL1 + all expansions once again, help on the wiki and all, and (as reqested long time ago by User:FatMan2539...) put the guide on "how to mod game to make your custom weapons" (mind, only for PC). So that's that I guess, off to install BDL and make me a Siren, pew pew!! ;D Msg approved by