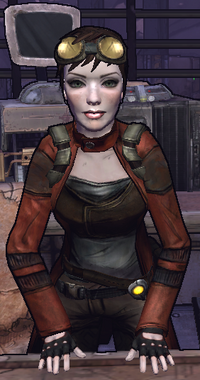 Welcome to Borderlands Wiki! Thanks for your edit to the New Haven: Weapon Crate Locations page. We hope you will continue to be a regular contributor, and will help us improve the wiki!

Good call on the splash damage thing vs. buried spiderants. Is there any way you can verify that it works though? I'd hate to slap a {{fact}} tag on such a pretty edit.

I can take a video or screenshot if that's necessary, but you can try it yourself quite easily. Just grab an Outrunner and drive around in places abundant with Spiderant life (such as Rust Commons West), and near a Spiderant spawn point, press the lock on button. The turret weapon locks on to a buried Spiderant. It doesn't display what type of enemy it is, just the red diamond-shaped indicator. Shoot a couple of rockets and there'll be a Spiderant death animation, loot and exp.
M0RGION 10:34, November 21, 2011 (UTC)

No worries, Auntarie confirmed for you. The only reason I was skeptical was because the game has been out since 2009 and no one's ever mentioned it before. No worries.

This may be an old post, but may I add that Bloodwing will attack buried spiderants as well?--Talk to prinny!

Please refrain from using "I, me, my, you, your, you're...etc." when editing an article.

Please remember to categorize new images uploaded to the wiki. Uncategorized and or unpublished images will be deleted. Thank you.
how'd you get the drifters to stand still and smile for their pictures? do you take requests? the wiki needs images of the various claptrapped baddies of dlc4, notably -trapped hyperion soldiers, a badass psycho-trap, and those pesky rakk-traps. thanks, much.

Drifters are surprisingly docile after being shot full of holes. Those are dead Drifters I took screenshots of, that's why they were so easy to catch on camera. And yes, I sorta take requests (as in I'm not going to bend over backwards to try to take a pic of a random happening/item/encounter or any other extremely tricky shot, but if I'm about to go kill Motorhead and there's a shortage of Motorhead pics, I'll be sure to press F12 a couple of times during the fight), just tell me what is needed and I'll try getting some pictures sooner or later. Sadly, I don't have Claptrap's New Robot Revolution (yet), so that's the only DLC I can't supply any content of.
Oh, and sorry for not categorizing images, I always forget.

how 'bout a nice clear pic of skyscraper? the existing pic is rather distant and is dominated by the player's HUD. if desired, you may disable your HUD to snap a clearer pic. thanks, mate.

Sure, I'll do that as soon as I can do the quest. That'll be next week, because I can't play during next weekend.

pic look good, mate. thanks, much. the main pic was a great quality replacement for the previous image. i did move the other pics to the talk page, though. amusing pics like those are best suited for the talky.

You're welcome! If there are other pics needed, I'll be happy to help. I'll move the "bouncy friend"-picture back to the article, it's a cool action shot and the article has a nice space reserved for it under the info box.

The reason they caught you by surprise is most likely because they erupted from the ground very close to you and immediately attacked. If you sit off from some drifters already on the surface, you should hear them screeching.

When they burst out of the ground next to you and attack, there's no sound until their shadow is looming over you and they screech/moan just before attacking. That's what I've experienced, anyway. I'll clarify what I meant in the article.

Probably more in there than just that one in Shotgun/parts. Another pair of eyes reviewing the parts pages would be very welcome. There was some cut and paste involved, as you've probably gathered.

I don't have a lot of wiki time remaining this month, so I rather doubt that I'll get around to populating the SMG and Combat Rifle parts bestiaries. But it's still possible. Dämmerung 21:36, January 27, 2012 (UTC)

Another note, since from your contribution history, you appear to be graphically inclined: when I started compiling parts pages last year, I included visuals where I could to aid in parts identification. Qv Revolver/parts and Repeater/parts. I had to abandon that in the interest of getting the parts pages done in the time available to me, and so this month got out some attempts at Sniper Rifle/parts, Rocket Launcher/parts, and Shotgun/parts, all lacking visuals-- instead, I included a link to Parts Spotter's Guide at gbx forums. I do think that the later pages of mine are poorer for lacking visuals. Adding visuals in the manner of the Revolver and Repeater pages would be a lot of work, but would add a lot of value. Dämmerung 22:28, January 27, 2012 (UTC)

I was actually using the Shotgun/parts page for reference and wasn't looking at it in an editorial way, that one typo was the only one that caught my eye with a quick read.

If you could do the basic content, structure and technical details of Combat Rifle/parts and Submachine_Gun/parts (about like all of the other Parts pages are right now), I'd be happy to proofread and add images to all of the different Parts pages.

How did you manage to take such high-resolution images of the gun parts? (Such as Revolver-accessory-1.png and Repeater-trigger-2.png.) Were they taken in-game or using a resource such as Gear Calculator?

I took those pictures in-game, mostly on the stage at Moxxi's where the lighting is quite bright. I think I'd been playing a lot of pistol users at the time, so I had quite the collection. Got some good 1st-person shots of repeater actions that way, too, but couldn't think of a good way to get them on the page. Then Smeggit's efforts at gbx forums took off and took the heat off of me.

Thanks for all your attention here. That Cyclops c/p was particularly egregious. Dämmerung 00:52, January 29, 2012 (UTC)

Yeah, I edited the Sniper Rifle Parts after the Rocket Launcher Parts, and while editing the sniper one, came across the Cyclops reference and thought "I've seen this before..." The "What links here" tool is useful.

I'll do a proofreading pass first and then set on doing the images tomorrow.

EDIT: Umm, how does Material_Jakobs_2 affect weapon zoom again? It's mentioned on both Sniper Rifle/parts and Revolver/parts, but I can't reproduce the claimed effect.

You won't be able to reproduce it in Gearcalc. Gearcalc is a work of man, and like all such has flaws. Get a ZZ weapon in-game and compare it to its equivalent-sighted counterpart in XX or vanilla materials. Gearcalc also fails in its weapon naming logic. Dämmerung 07:14, January 29, 2012 (UTC)

Why, thank you. Three other points that may help with your parts images:

I always disable HUD when taking screenshots and I only have one monitor and I only used material1's so no problem there.

I've done taking the the screenshots of the shotgun bodies, barrels, and accessories, now to modify the images and to add them to the article.

Yeah, I had uploaded half the images before noticing that, but seeing as I can't rename images (I think only moderators can) I just went with it. At least now I'm forced to differentiate the parts images of other weapons...

Progress continues, very heartening. Particularly looking forward to seeing those body shots. I'm back online, and hope to get the remaining pages stubbed before you catch up to me. Dämmerung 16:13, February 6, 2012 (UTC)

I barely had time to do the stocks yesterday, the bodies were a mission impossible. Today I'm so busy nothing is going to happen but tomorrow I will get them online.

EDIT: Nah, I found time to do the bodies anyway.

Three months later! The new parts pages for CRs and SMGs could really use some of your attention. Proofreading, pictures, whatever. Dämmerung 17:33, May 27, 2012 (UTC)

Good to know, mate! I will have to reinstall Borderlands, though, I messed up my computer a month ago and lost most of my hard drive data.

Retrieved from "https://borderlands.fandom.com/wiki/User_talk:M0RGION?oldid=229969"
Community content is available under CC-BY-SA unless otherwise noted.