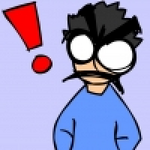 An archive of old posts can be found here.

this week's poll ends soon. would you care to choose the next poll topic? you may view the poll archive to see past poll topics, and the poll talk page to see user's ideas for future poll topics. or, of course, pick any topic that amuses you. please respond as soon as possible before 11:59pm cst, (gmt -6) 2/12/2011. thanks.

I just made a post on a forum thread! See! I'm still here!

In reality I am away for the weekend, normal droogie duties will be resumed tonight.

And no, unfortunately I am neither anywhere interesting nor exciting, and I can assure you absolutely no fun is involved.   Bukkithead

You know me too well.

It shall be done.   Bukkithead

Text is unreadable when the picture is shrunk to userbox size. I has a sad. :(   Bukkithead

sry, I couldn't resist. There are actually a few pages that need work right now but I am so tired that I don't trust myself to work on them. Take a look at Operation Trap Clap Trap, phase one. If you have the time that is, I am soon off to bed.

P.S. What country are you from? I could guess but I don't want to be wrong.

I shall have a gander.

Fair England is my country of residence, good sir. :)   Bukkithead

I thought so!!! The wife is from NZ and lived a year in London. I can spot a Britt

The best I can offer is Oxford, I'm afraid, I don't know London that well. My experience with drunken Irish people is that they are just as likely to be in the Tube as almost anywhere else. The reason for this is that Irish people have the capacity to be drunk wherever they are, and they go to many places, just like other people.   Bukkithead

Next thing you know, he starts speaking Shakespeare--Talk to prinny!

Oxfords pretty spiffy too. I'm quite jealous of the architecture and was amazed at how many bicycles there were on the streets.. because Americans have lost the concept of what a bicycle isespecially Texas.

That which we call an Irishman, by any other name would be as drunk.

Oxford is about 80% students and 20% impossible to drive in, so all the bikes make sense. I wish I could say we were all suddenly health-conscious, but I'd be lying.

oh, thank god! you're alive! when this guy showed up on my doorstep i was worried the zomb'z had gotten to you. should've know better.

It's alright, for now.
Trust me, if I ever get 'zombd' then I'm coming straight for your house.   Bukkithead

you don't know where i.... wait, did frychick put a return address on your box o' swag?? (damn) {{user loads anti-zomb'z shotty}}

Hi, Mad Cormorant here. Can I add you on Steam/Gamespy?

read and revise at your leisure