Well, let`s see... I love music! Specifically music from the 70`s and 80`s, (Pink Floyd, Supertramp, Led Zeppelin, Yes) but I also listen to modern stuff, (The Killers, Cage the Elephant, Green Day, Muse) just as long as it didn`t come from the 90`s... ugh... I am a very active musician, and if I had three clones of myself, I would have a very potent rock band! :) I currently am working on an album with my brother and my best friend. We don`t have a drummer, but that makes us sound original. My brother is the singer, my best friend is the bassist, and I play guitar and sing.

I also love to eat - I consider it a hobby. No, I`m not fat, in fact, I am very underweight for my age. God bless high metabolism! ;)

I like video games, but I wouldn`t consider myself a HARDCORE GAMER. Some favorite games are StarCraft, Zone of the Enders, Red Faction, and, of course, Borderlands! Oh, and I am a proud PS3 user, and will not be swayed by the sheer number of people who play the 360 - I will stick with QUALITY over QUANTITY!

This is the FIRST wiki I have ever contributed to, and I felt it was about time I did! Please, if I say something that offends you, please do not send me hate mail... I REALLY didn`t mean to offend you, I only was stating my opinion. Besides, what does my opinion mean to you? Nothing, if you don`t want it to!

Oh, and kudos to anyone who knows the full name of the band that is my current icon!

My Views on Borderlands

Well, where do I start? This game is awesome! Great graphics! Great music! Great attitude! Very lengthy story! Plus, 67 million guns! This game definately deserves a 9 out of 10 because of it`s gameplay, replay value, attitude, and creativity! Not to mention the 67 million guns! Though the PS3 version definately had some issues early on, they have since been resolved, more or less. It looses a point for it`s lack of a plot progression, invisible walls, random respawning enemies, and unnessesary amounts of reading text; even for story missions! Overall, a great game that I`m still playing even without any DLC`s, except General Knoxx.

Gun wise, this game is unmatched. If you can`t find a gun you like in Borderlands, it can`t be found on Pandora! (And you`re probably pretty picky!!) The sheer amount of guns that are mostly quite different actually makes it painful for me to go back to a game like Call of Duty with it`s "impressive" amount of guns, (like 20 or 30). Nowhere near 67 million! The guns are all very satisfying to use for the most part, (some repeaters and rocket lanchers don`t measure up). I have only two real complaints about the guns.

1) I would have liked to see some "real life" shotguns in Borderlands. The two versions they had in the game; the combat shotgun - loads like a revolver, and the assualt shotgun - automatic clip loaded. I would have liked to see a sort of tactical or trench shotgun where pellets are loaded individually. Or better yet, a double barrel shotgun like you see T.K. with in the movie with him in it. If nothing else, there should have been a mission that looted you a double barrel shotty in Zombie Island but no - they just had to leave out the number one gun used to kill zombies. Anyway, on to point number 2:

2) The semi automatic guns just generally suck. I blame this on the fire rate statistic that caps the speed which you can fire the gun. More so, repeaters are actually more effective if you just hold down the trigger button that if you actually manually squeeze for each shot. I think they should have put the fire rate cap on if you do hold the trigger down, but remove or extend the cap if you don`t just hold the trigger down. This will give those who are going "authentic" an advantage.

I collect many types of guns in Borderlands and I shall list them below: 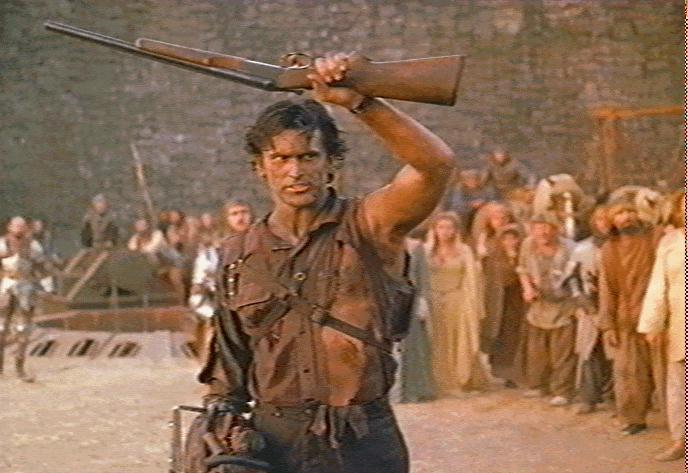 It's been long awaited, but here they are!

Note: They are all level 48, since that's the highest Baron Flynt will drop. One could theoretically make them level 61 with the use of Willow Tree, but for all intents and purposes I have decided against that.

Other notes: Purple Rarity, Nice damage but reload time is longer than most Boom Sticks. I do not use it often.

Other Notes: Purple Rarity, X1 Fire Element, The first thing that stands out is it's Fire Rate. Sure, on paper, 4.3 doesn't look much higher than 3.2, but when it all plays out it means that it takes less time to fire a burst, you can effectively fire more rockets in any given time frame, AND it even prevents the one thing that the Boom Stick can do that most other guns can't - You can very easily kill yourself with it. If you accidentally fire a Boom Stick at the floor or at a wall next to you, chances are you won't be walking away from that. This often occurs when strafing, you'll pop out, fire a burst off, then pop back into cover. HOWEVER, if one of those rockets doesn't go off in time and hits the wall you're hiding behind - then you're in trouble. That's where increased fire rate helps. It allows you to get all your shots off in only a second so you have time to take cover and reload. I use this Boom Stick the most out of any of my elemental ones.

Other Notes: Purple Rarity, This gun has a part that creates a shaft of light along the barrel of the gun. This one is fun to use in the dark. :)

Other Notes - Purple Rarity, There is also an additional box like structure on the left side of the gun, right before the mag. It could be a couterweight of some sort, but I don't know the gun part that put it there. All I do know is that, even though it isn't stated on the gun card, (likely cut off by the red text) this Boom Stick has greatly increased recoil reduction, giving it accuracy far superior to that of a regular Boom Stick. Needless to say, a Boom Stick with accuracy has lethal potential, and I often use it.

Other Notes: Purple Rarity, X1 Shock element, This one looks SWEET when it goes off. I use it even just to look cool! It is also the only Boom Stick of mine that is useful regardless if I am playing a Commando, or a Shock Trooper. I use it more as a Shock Trooper, though (for obvious reasons).

Other Notes: Blue Rarity, Might just be my FAVORITE of them ALL!! Besides it having a great fire rate and decent damage, it has -get this- a melee blade attached! It's just the icing on the cake! This gun performs superbly and I use it almost all the time! The best Baron Flynt has to offer.

Retrieved from "https://borderlands.fandom.com/wiki/User:Tellegro?oldid=128067"
Community content is available under CC-BY-SA unless otherwise noted.