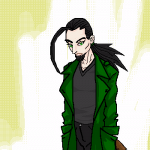 Somarinoa is the founder of Creativity Wiki, being a firm believer in imagination, as well as the founder of Extraterrestrial Fanon Wiki as a sister site to ASW. He is also known as ~gokou-sama on deviantART, where he is decently-known for his Ultimate Showdown game project. He is the bureaucrat of Alien Species Wiki after having brought it back single-handedly from death in 2006 until people took notice and turned it into a thriving wikia as well as on Super DBZ Fanon, and serves as an administrator on Egyptian Fanon, Mega Man Fanon, Ultimate Showdown (a fan-created wiki intended for a trio of his games, though not for everything he has created) and Ultra Dragon Ball. He is also a moderator on Sagan 4, a rollback on Supreme Dragon Ball Wiki and was the main content contributor to SporeWiki and formerly significantly helped out Conker Wiki and Zim Wiki. He is also a bit of a grammar Nazi.

Somarinoa plays a Siren in Borderlands 2.

Retrieved from "https://borderlands.fandom.com/wiki/User:Somarinoa?oldid=262055"
Community content is available under CC-BY-SA unless otherwise noted.