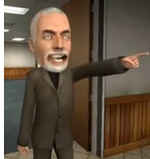 I like to both collect and build guns with odd, ironic, disturbing, or otherwise odd names no matter whether either the gun or its title is rare, common, or any even good at all. I also just like to collect and build exceptional or unusual variants of guns of all sorts, whether I use them or not.

I freely advocate for modding on a certain limited scale and as a way of exploring the game's workings and extending gameplay, but within reason. I especially have extremely high rate of fire weapons.

With his degree in Anti-Hacking Detection, DR. HAX serves as a metaphor of sorts for the part of me which violently detests people who hack irresponsibly and/or ignore reason. Originally appearing in DasBoShit's The Gmod Idiot Box , a series of YouTube videos created using Garry's Mod, Dr. HAX has consistently been seen busting no-good hackers throughout the series, often showing up unexpectedly and suddenly to bring the computer monitor of justice down upon haxors (and often other just plain annoying people who deserve a monitor to the head). See Dr. Hax in action here

Dr. Hax sends a monitor flying at a fleeing hacker

Another hacker about to take a fall thanks to Dr. Hax

Dr. HAX catches a hacker in the act 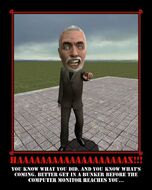 YOU. WILL. NOT. ESCAPE

Another bust gets ugly, but justice must be served 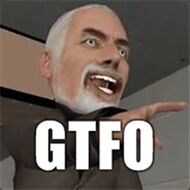 for haxing
Add a photo to this gallery

My Stance on Over-Powered (OP) Items

I define OP HAX as including Scorpio items, Stock Weapons, the Rose Omega shield, and anything else which taints the online community and is excessively powerful to the extent of "breaking" the game for other players. These things are just stupid and give annoying people the ability to be even more annoying.

Cool kids know how to beat the game and win duels without OP Hax. Or at least be a good sport about losing.

OP Hax is not a solution to noobitus.

Improper use of or requests for OP Hax may result in having a large computer monitor flung at your head by Dr. Hax.

Attempting to pass OP Hax off as legit will result in loss of social status and Wiki credibility, temporary or permanent online bans and deletion of haxed items.

Transporting, duplicating, or trading OP Hax to unsecure sources is illegal in approximately 100% of the world.

EXCEPTION: OP Hax may be used to directly combat encountered online users of OP Hax, but only insofar as to negate their intended undue advantage, i.e. using Scorpio guns to destroy users of Rose Omega shields in duels if one is not a Hunter or does not possess a Vladof "RO Buster" Vengeance. Copies of this may be obtained by speaking to Dr. HAX on the talk page.

Note: Dr. HAX will NOT distribute OP Hax even for the purpose of countering OP Hax online.

Nothing ticks me off more than someone with a modded gun claiming it is legitimate despite community evidence to the contrary. Also:

Pictures, videos, and userboxes may be present in excess

Add a photo to this gallery
Retrieved from "https://borderlands.fandom.com/wiki/User:Skeve?oldid=376272"
Community content is available under CC-BY-SA unless otherwise noted.