This is my primary Lilith build, Major Katsuragi. Her strategy consists of using a modified Maliwan Tsunami, which has been optimized and upgraded with the Twisted prefix and Anarchy title. This SMG has an extremely high clip for an SMG (99), and with her skills & COM (+45% elemental chance, +67% SMG damage, +60% bullet speed) becomes an obscene weapon. Her secondary weapon is an Atlas Aries with optimized parts and the Anarchy title. Her third and final weapon is a Torgue Undertaker, once again with optimized parts and the Anarchy title. The fourth weapon slot is mostly unused, or is occupied with temporary weapons. 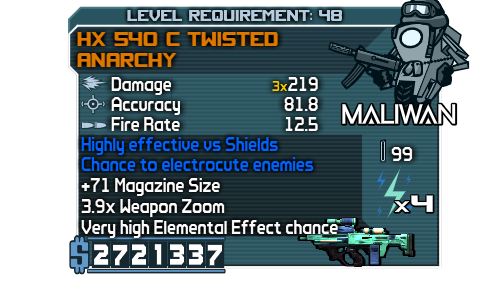 Primary Weapon Strategy
Run and Gun, you get about 8000dps before Proficiencies, you cannot screw up.

Retrieved from "https://borderlands.fandom.com/wiki/User:Ipuvaepe/Major_Katsuragi?oldid=113448"
Community content is available under CC-BY-SA unless otherwise noted.