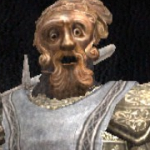 Giantdad is a cameo character in Borderlands 2, originating from the game Dark Souls.

Giantdad can be found anywhere in Pandora, and only appears while the Vault Hunter has set their Network Options to Online Public.

Giantdad was adventuring all of Lordran, his skills in melee combat unmatched, and his identity masked to all. After reaching Anor Londo, he had achieved demigod-status, becoming a Legend to most of Lordran's still sane citizens. Being the Chosen Undead of his time, he made his way through Anor Londo, and acquired the Lordvessel and made his way through the Kiln of the First Flame and confronted Gwyn, Lord of Cinder. However, after several days and nights of fighting Lord Gwyn, he finally succumbed to his wounds, the Legend finally meeting his match.

However, being Undead, his end would not be met in the Kiln. The Legend would go on to achieve literal godhood, his beyond-godly strength allowing him to move around in his Giant Armor as if he was wearing naught but a light blanket.

After slaying countless more Chosen Undead, he finally made his mark upon the world. Giantdad's enigmatic figure was etched in stone as the Legend. His accomplishments in both his past and post life easily made him worthy of such a title. His true name unknown, he was forever known as the Giantdad, in rememberance of his infamous combo of the Mask of the Father and Giant Armor.

Following his misadventures in Lordran, he travelled the universe, landing in Pandora. Upon hearing the riches contained within the Vault, he set out to assist others in their goal, in hopes that one day he would create an opponent worthy of facing the Giantdad.

Retrieved from "https://borderlands.fandom.com/wiki/User:Giantdad?oldid=338261"
Community content is available under CC-BY-SA unless otherwise noted.