Borderlands Wiki
Register
Don't have an account?
Sign In
in: User of the Month, Xfire users, Steam users

Hello, all, the B'lands community.

(check source for the whole (too damn long) story.)

fruguy42 - The Answer to Life, the Universe, and Everything

Hunter Sniper - "Remember, if it took more than one shot, you weren't me."

Join up and we'll start up the ol' ultraviolence: 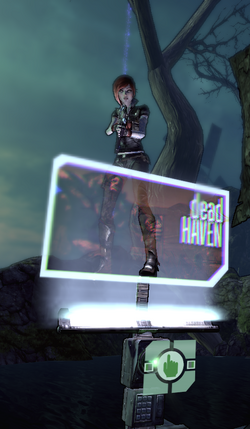 RADE ZAYBEN, news anchor: "In local news, following last month's release of Jakobs Cove's new "Dead Haven is for Lovers" campaign Dead Haven enjoyed a threefold increase in its tourism industry. Our very own not-so-roving correspondent, T.K. Baha, is on the scene. T.K.? How are things at the Cove?"

ANNOUNCER: "Tonight's News at 10:37 was sponsored by ENGORGE! by Atlas! Please stay tuned to this paid announcement." 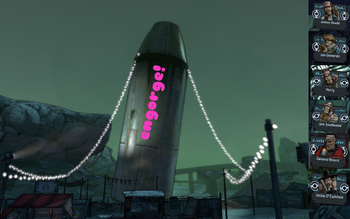 ANNOUNCER: "Are you tired of shooting a carbine when you really want a rifle? Do you ever feel like you are just firing blanks? Do the ladies in your life find your gun a little short on firepower? You need ENGORGE! by Atlas! You'll be firing automatically, fully-automatic, on all cylinders!"

Dirk Smallwood: "Dirk Smallwood here for ENGORGE! The Atlas Corporation has asked me, the world famous vault hunter, to tell you about ENGORGE! These are the best suppositories I have ever used!"

Joe Gamerski: "These are the coolest, most expensive MTG counters ever. In the whole galaxy!"

Father O'Callahan: "Aye, 'tis a fair fine Sabbath morn' when i use ENGORGE! to purify me Holy Water."

General Knoxx: "I had my secre-friendly order up a pallet of this stuff. Uh, for R & D purposes only, of course."

ANNOUNCER: "ENGORGE! may not be for everyone. Most men (2%) tolerate using ENGORGE! well, especially when compared with prisoners of war of comparable size and weight. However, like all drugs, ENGORGE! can produce some notable side effects, all of which are probably really, really terrific and nothing that anyone should be concerned about, let alone notify any medical regulatory commission about. Most side effects of ENGORGE!, or their sufferers, are usually short-lived, and are rarely so fatal that the remains can no longer be identified, provided good dental records are available. Some known side effects are:

WARNING: In a small number of tested cases (84%) ENGORGE! was found to cause abdominal wall muscle breakdown coupled with spasmodic activity in lower back/spinal muscles, resulting in most users violently bending forward like a book slamming shut. Also, ENGORGE! can contribute to developing inhumanly powerful tongue muscles, capable of licking through steel. If, after taking ENGORGE! for a period of four to six weeks, you still have any functioning lymph nodes remaining, double the dosage every two (2) days until they are all gone.

NOTE: If you should be aware of a pregnant woman who has handled ENGORGE!, attempt to warn the peoples of Pandora of the mind-numbing horror that is about to unfold. Also, drink plenty of liquids."

Announcer: "This light-cycle bring an empty bottle of ENGORGE! to the Giant Bullet for half-price admission! Ask your doctor about ENGORGE! and start satisfying the woman you could never attain before! NOW! ENGORGE!!!"

The preceding announcement was brought to you by