Up To Our Ears

Up To Our Ears

Power to the People

Up To Our Ears is an optional mission in Borderlands given by Scooter. It becomes available after Seek Out Tannis is complete.

"Man! You wouldn't believe the crap I have to put up with. And when I say crap I mean honest to goodness crap! Seems as though bandits overran the Rust Commons Sump Station and killed the personnel. Now the dang pipes are clogged! With all that slurry trickling through tons of vermin-infested, rusting metal, it gets saturated with very unpleasant debris, if you know what I mean. We need it fixed immediately, or we'll be up to our ears in who-knows-what." 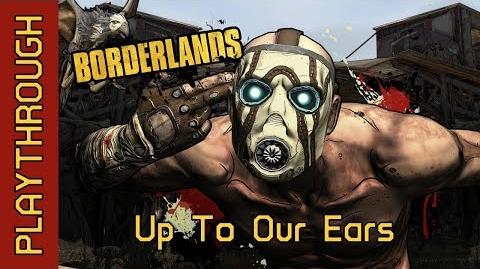 Destroy the blockage in 2 pipes at the Rust Commons Sump Station.

This mission takes place in the Rust Commons West where a pair of blocked pipes on the back of a building can be shot at to clear out the blockage. The approach to the site is by vehicle, and then conventionally on foot with a running battle through various bandit enemies.

The pipes are in an elevated position and the blockages are highlighted in green. The pipes can also be shot at from a safe position overlooking the back of the site, again accessible by vehicle, but without the need to slog through enemies patrolling on the ground.

Once the job is complete, Scooter will offer a reward.

"Now you know what I mean when I have to deal with crap. That ought to be alright for now. Thank you. Now I just need to figure out how I'm ever going to bribe somebody to work there again."