watch 01:39
'Borderlands' Lore: Unkempt Harold
Do you like this video?

Borderlands 2
Special Part(s):
GD_Weap_Pistol.A_Weapons_Legendary.
Pistol_Torgue_5_Calla
GD_Weap_Pistol.Barrel.
Pistol_Barrel_Torgue_Calla
GD_Weap_Pistol.Manufacturer
Materials.Mat_Torgue_5_Legendary
Unkempt Harold is a legendary pistol manufactured by Torgue.
In Borderlands 2, It is obtained randomly from any suitable loot source but has an increased chance to drop from Savage Lee located in Three Horns - Divide.
In Mr. Torgue's Campaign of Carnage, the Unkempt Harold can be purchased from a Torgue vending machine as the 'Item of the Day'.

Did I fire six shots, or only five? Three? Seven. Whatever. – Fires 3 shots in an accelerating horizontal spread that split twice to create four additional projectiles. Consumes 3 ammo per shot.

The Unkempt Harold is a deadly pistol that can be used in close and medium-range encounters. Shots fired from this pistol split slowly (in a 3-5-7 pattern) into seven after traveling a certain distance. As long as the projectiles have begun splitting, regardless of progression, a full hit will do damage as though a full spread of 7 had connected.

The pistol is a popular choice weapon for Salvador with the double penetrating prefix as Divergent Likeness and I'm Your Huckleberry can boost its damage as well as reload speed, and when properly invested into a pistol build for Salvador, he can make short work of enemies and bosses.

Zer0 can make excellent use of the Unkempt Harold as Vel0city can boost projectile speed, critical hit damage and overall damage to the weapon; however, running Tw0 Fang with an Unkempt Harold with a "Double Penetrating" prefix can chew through ammo quickly. 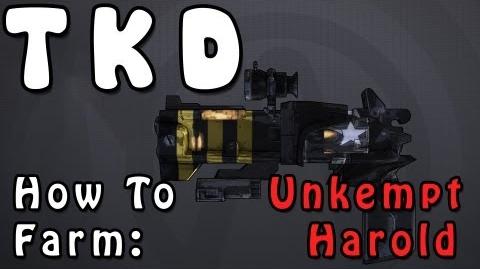