Borderlands Wiki
Register
Don't have an account?
Sign In
Advertisement
in: Articles Under Construction, Articles with incomplete sections, Weapons
English 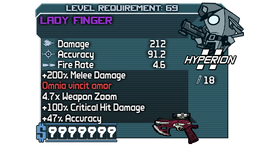 Most of the Unique items in Borderlands are acquired in one of two ways:

Note that in both cases, these are always guaranteed drops. Exceptions include the Lady Finger, which is found in a mission-related stash, and The Chopper, which has no guaranteed drop location, and can only be farmed.

During a normal playthrough of Borderlands, almost every unique item can be acquired once, with no particular effort. It is when trying to farm a unique item more than once that things get more complicated. The re-availability of unique items can be broken down in several groups:

In Borderlands 2 and Borderlands: The Pre-Sequel, mission rewards cannot be acquired by enemies after the missions are completed, meaning they are a one-time only reward.

In Borderlands 3 as of the 7/23/2020 update, it is now possible to get leveled mission rewards from either the Gungun / Eridian Fabricator's alternate fire mode (250 eridium for 1-4 items of either legendary or unique quality) or from Crazy Earl's vending machine on Sanctuary III.

Unique weapons bypass Borderlands classic weapon generation mechanics in that they often have restrictions on their parts. This means that unique weapons usually don't have as large a spectrum of characteristics as other weapons. Firstly, all unique items will have a unique material. This material will give it a special color scheme, and sometimes also change its characteristics. Like legendary items, unique items will also have a predefined part from which the special effect derives. Finally, there will be the part restrictions. For example, Sledge's Shotgun will always have a blade, will always have a 2-clip magazine, and will never have a scope.

Unique items don't have any special rarity. Most unique items are of the blue rarity, with a handful of green, purple, or legendary rarity items also being classified as Unique.

As long the unique item's part restrictions don't forbid the legendary item's part, and the manufacturers match, then it is not impossible for Borderlands to generate unique legendaries. For example, Atlas's Ajax's Spear combat rifle can spawn with an accessory, and the Atlas legendary combat rifle, the Ogre, gets its effect from its accessory. As such (albeit extremely rare), it is sometimes possible to find an Ogre Ajax's Spear.

In most cases these items will have the name of the legendary weapon without any prefix.

A unique weapon is said to be aftermarket (in Borderlands 2 and Borderlands: The Pre-Sequel) when it is produced by a certain manufacturer, but contains component(s) from others (usually with a different barrel). While this is standard fare for the most common weapons and certain legendary weapons, unique weapons are built from a predefined set of parts, almost always exclusively from a single manufacturer. Rocket Launchers are an exception because they can have an exhaust from any suitable manufacturer.

A list of all the unique items, their initial drop location and their farming location, if any.

* These items can only be obtained once per playthrough.
* The Rider is only available for a limited time.
* The Spy may also drop from King Wee Wee.

* These items are only offered as mission rewards and cannot be legitimately obtained by other methods, but can be re-obtained in each separate playthrough or via a playthrough reset in UVHM.
*
* The Grog Nozzle is a mission weapon. The weapon cannot be legitimately obtained without the mission. The only exception to this is the fourth week of the Borderlands 2 $100,000 Loot Hunt.

Names and Locations (Borderlands: The Pre-Sequel) 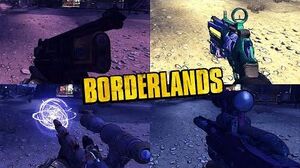