Undead Ned is tough. Just when it seems the game is over, the Vault Hunters come face to face with the undead version of Dr. Ned. After defeating the normal Dr. Ned, drop down a series of shafts and tunnels leading underground, eventually coming to a huge cavern with a lake of blood. Once into the lake, Undead Ned appears and will attack.

Other Strategy: There is not an actual need to travel into the lake of blood to kill him. When going down the bloody chute to get to the lake, there is a small ledge (very small, do not move when using it) right before the small "beach" before the lake to land on. Simply stand here and get headshots on him with a Revolver or Combat Rifle. All he will do is stand there and make clawing motions, occasionally diving under then popping back up. He is very easy to kill this way.

If playing in split-screen or with two or more players, run a distraction scheme with one player shooting at the boss while the others fire away. If he goes after the characters who are firing, just switch positions. Players will also want to, if distracting him, occasionally turn around and fire at Undead Ned's head to anger him and get his attention. This works on other bosses as well.

Another strategy is with the Soldier. Have him stand on the ledge that is right before the lake of blood and that is impossible to jump back on after you jump down. Throw the turret down in front of the lake and Ned will swim towards it. Then, take easy shots on his body with SMG's and Combat Rifles being the good weapons to use. 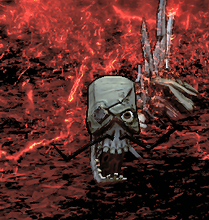 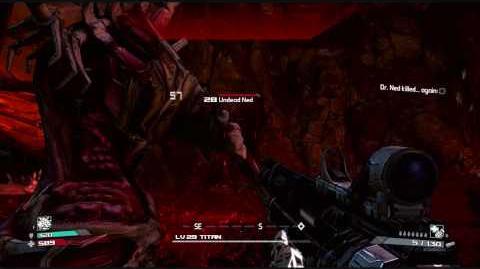