Tyreen Calypso is one of the two main antagonists of Borderlands 3, and a co-leader of the Children of the Vault, alongside her brother Troy, until his death leaving her as the sole leader of the cult. She is one of the Sirens, a group of people with unbelievable powers.

Tyreen was born on the Eridian homeworld of Nekrotafeyo as the daughter of Typhon DeLeon, the first Vault Hunter, and Leda DeLeon, and is the twin of Troy Calypso. She and Troy were conjoined twins, with Troy's attachment to her being described as "parasitic". They were separated by their father.

Tyreen is a Siren with the ability to leech the power from living beings, potentially killing them. This includes regular people, Sirens, and even the guardians found within the Vaults. It is implied that Tyreen's Siren powers originate from Nyriad: after Typhon and his wife Leda opened the vault on Nekrotafeyo, Nyriad's powers manifested in their daughter.

At some point, Tyreen leeched their mother, killing her. Typhon was left as a single father and entertained the twins by telling them about his days as a Vault Hunter. Typhon's steady stream of stories filled Troy and Tyreen's heads with ideas of fame and fortune. After Tyreen coerced Troy to repair their father's ship, the twins left for Pandora. The two of them began preying upon the damaged minds of Pandorans by broadcasting senseless murders they committed across the ECHOnet, gaining a literal cult following as a result, forming the Children of the Vault.

Tyreen is the primary antagonist of Borderlands 3. Initially referenced as a "God Queen" by the Children of the Vault, she soon becomes aware of the new Vault Hunters. At first she merely joins with her brother in heckling and taunting the Vault Hunters, calling them "Vault thieves" and setting the Children of the Vault against them in increasingly aggressive actions. Eventually she takes direct action, using Siren powers augmented by the power of others, to dominate and destroy.

As the Crimson Raiders prepare to leave Pandora aboard Sanctuary III, the launch site is suddenly assaulted by the Children of the Vault, led personally by Troy and Tyreen with the intent of recovering the Vault Key. Amidst the chaos, Lilith is forced to face off against the two Calypsos by herself. While Tyreen fights Lilith, Troy broadcasts the fight across the ECHOnet. After Tyreen is knocked away, Lilith teleports behind Troy and knocks him down, where she is shocked to learn that he too is a Siren. Troy remarks that it "runs in the family", giving Tyreen enough time to subdue a distracted Lilith; Tyreen reveals that Troy is a parasite, and that she is the only thing keeping him alive as she begins to leech Lilith's powers. Before Tyreen can completely kill Lilith from the process, Troy convinces Tyreen to stop in order to give him some of the absorbed power. After making a mockery of Lilith and recovering the discarded Vault Key, the two leave her to die at the hands of their followers while they leave to check up on their deal with Katagawa Jr. on Promethea. Lilith was, however, saved by the Vault Hunters after the COV assault was repelled.

Once the Vault Hunters open the Vault on Promethea at The Forgotten Basilica and defeat its guardian The Rampager, Troy and Tyreen arrive after the Vault Hunters finish looting the Vault. The two thank the Vault Hunters for doing all of their dirty work in defeating The Rampager. As Tyreen leeches The Rampager's power, Troy reveals that the monsters contained within the Vaults are the source of their power. After giving Troy some of her absorbed power, Tyreen apprehends Ava, though Maya retaliates by phaselocking Troy and forcing him into an headlock, demanding for Ava to be released. Once Tyreen complies, Troy grabs ahold of an unaware Maya's arm and drains her of her powers, leaving Maya to fade away. An enraged Ava attempts to shoot Troy, only to be phaselocked by him, leaving both Troy and Tyreen to be surprised at his feat. With their mission complete and an extra bonus, the Calypsos take their leave, though not before Troy sarcastically remarks to Ava on who to call if she ever becomes a Siren.

After making a mockery of Maya's death across the ECHOnet, the Calypsos and their followers travel to Eden-6 to search for its Vault. Tyreen establishes an alliance with Aurelia Hammerlock by killing Montgomery Jakobs and allowing her to take control of the Jakobs Corporation.

Knowing that the Calypsos were after the power of the Vault monsters, Patricia Tannis devises a plan to nullify the next Vault monster's power to prevent the Calypsos from siphoning it. After locating the Vault of Eden-6 at The Floating Tomb, the Vault Hunters open it and defeat its guardian The Graveward. After its death, Tannis successfully nullifies The Graveward's power, much to the annoyance of the Calypsos, who call the act "uncalled for", and Tyreen complains of hunger. However, after the Vault Hunters finish looting the Vault of the Graveward and regroup with Tannis, Troy remotely phaselocks Tannis and Tyreen promptly warps her away.

As the Vault Hunters arrive, Troy battles them while simultaneously opening the Great Vault. Despite his best efforts, Troy is ultimately defeated, and laments to his now unconscious sister that they were so close in opening the Great Vault before collapsing onto the ground, dead. While the Crimson Raiders celebrate their victory, Tyreen awakens and acknowledges Troy's sacrifice, congratulating him for completing his mission and promising to continue their work "together" as she absorbs Troy and the last of his essence completely. Tyreen crushes Ava, Lilith, and Tannis with large rocks, believing them dead. She then makes an ECHO broadcast using a camera from Troy's fallen prosthetic arm, before awaiting the release of the Destroyer.

To stop the Vault Hunters from activating the Machine and closing Pandora, Tyreen sends in multiple waves of Children of the Vault members, before eventually appearing in person. She incapacitates Tannis, who is charging the Machine, and Ava, who is protecting Tannis. Tyreen then takes a piece of the Machine and disintegrates it, permanently damaging the mechanism. When Lilith attempts to shoot back, Tyreen apprehends her. She is about to kill Lilith when Typhon restrains Tyreen with his whip. Tyreen uses the whip to pull herself closer to her father, saying she is "gonna take what's mine" before lifting him in a chokehold. Typhon reveals a grenade and attempts to kill Tyreen and himself with it. However, Tyreen absorbs the grenade blast with her powers, redirecting it into a shockwave that sends Typhon into a wall, soon killing him. With the Machine destroyed, Tyreen phaseshifts away.

When the Vault Hunters return to Pandora, Tyreen is at the opening of the Great Vault, and the Destroyer is awakening. She falls backward into the Destroyer's tentacles rising from the pit, and, after a flash of light, reemerges as Tyreen the Destroyer. Despite this, Vault Hunters still managed to kill her for good, allowing Lilith to reclaim her Siren powers. 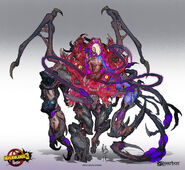 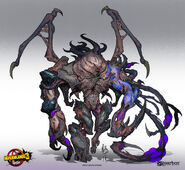 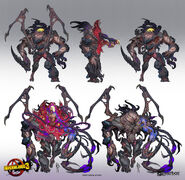 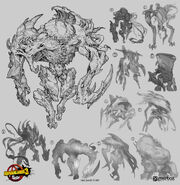