Typhon DeLeon is an NPC from Borderlands 3.

Typhon DeLeon is the first Vault Hunter. He is shown as being a genuinely good guy and not a natural fighter; to survive, he follows his intuition and rolls with the punches. Unlike most of the playable characters in the entire franchise, Typhon DeLeon's pursuit of the Vault isn't for fame or glory; he's driven by curiosity itself, driving him to unearth the secrets of the universe, but, as Typhon quickly realizes, the galaxy's corporations don't share his values. Despite this, he doesn't let the darkness of rival corporations and wars and betrayals get him down. Throughout the game, the player will listen to his many failures, but Typhon would always keep picking himself back up again. He also has a fixation on Vercuvian ham both as a delicacy and a tool, keeping one strapped on his back to protect himself during his adventures.

According to his journals, Typhon was born to a family of turd farmers. His parents died when he was 16. Typhon wished to have a more exciting life than just as a 'turd farmer', so he hitched a ride onto a merchant ship bound for Promethea. This would trigger his many adventures and exploits, becoming the first Vault Hunter in the galaxy.

Typhon would travel to many planets, including Promethea, Athenas and Eden-6; while searching for the Vault on Eden-6, he struck up a friendship with Montgomery Jakobs, the head of both the Jakobs family and corporation. During one of their hunting trips, Typhon noted the stopping power of his friend's rifle by commenting 'if it took more than one shot, you weren't using a Jakobs'. With both liking the sound of it, Typhon allowed Montgomery to use it as the slogan for the latter's company. Additionally, after witnessing a young Wainwright Jakobs struggling to use a pistol due to his poor eyesight, Typhon suggested that Wainwright try using a shotgun instead, which ended up becoming the Jakobs heir's primary weapon.

After many years and adventures as a Vault Hunter, Typhon met a woman named Leda Calypso, a former Atlas researcher and historian with some knowledge of the Eridian language who wanted his help in finding the Eridian homeworld Nekrotafeyo. With both falling madly in love with the other, Typhon and Leda set out to find the elusive planet and ironically found it after crashing their ship while making love. Together, they explored Nekrotafayo and unlocked the hidden Vault, then celebrated their love once more on the spot. Eventually, Leda gave birth to conjoined Siren twins Tyreen and Troy; seeing how they were joined together, Typhon cut the two apart so they could survive and live independently.

Leda would shortly die after the twins' birth, supposedly due to the young Tyreen leeching her by accident, and Typhon found himself a single parent raising his two children the best he could. He would retell his days of adventuring as a Vault Hunter to his children and both Tyreen and Troy would soon grow tired of living in a hidden part of the galaxy, craving adventure and fame of their own. The twins soon left Typhon alone on the planet to venture off into the galaxy, christening themselves as "The Calypso Twins"; before they left, it is presumed Typhon was made aware of his daughter exhibiting similar Siren powers to Nyriad, one of the first recorded Sirens and the previous Phaseleeching wielder; strangely, Typhon noted, Troy was also exhibiting similar Siren-like abilities. After some time on his own, Typhon built two robots from some of the salvage from his crashed ship and the two served as his companions for many years as he remained hidden on Nekrotafeyo.

Typhon is known as a legend to the Vault Hunters, with no one aware of his status or location. After Tyreen attempts to open the Great Vault the first time, she accidentally drops an ECHO recorder as she departs. A man frantically asks what they have done, as the Great Vault has opened and it will result in the destruction of Pandora. He immediately tells whoever is listening to head to Nekrotafeyo to quickly solve the problem.

The Crimson Raiders soon meet Typhon, who tells them that the crisis can be averted by finding Nekrotafeyo's Vault Key, which he had kept hidden from Maliwan. By using The Machine, Typhon hoped that it would be enough to close Pandora and trap The Destroyer, but his hopes are dashed when Tyreen irreparably damages it. With no other choice, Typhon attempts to kill Tyreen with a grenade, though Tyreen absorbs the blast and sends it towards Typhon, forcing him backwards and into a wall. After Tyreen leaves to return to Pandora, Typhon tells the heroes to not be the last Vault Hunters before succumbing to his wounds.

In the credits, his former robotic companions are shown burying him. 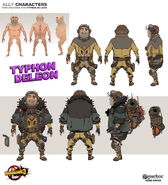