Two Wrongs Make A Right is an optional mission in Borderlands to visit retribution on a patricidal bandit by the name of Reaver. It continues the story of the missing Sean Stokely and his son Jed.

"Shawn's cousin will be devastated to hear about this. It seems that this 'Reaver' character needs to be taught a little respect for his elders. If he joined Krom's men, he'll probably be found in Krom's Canyon. Find him, and mete out some old fashioned discipline. Then, return to New Haven and report what happened." 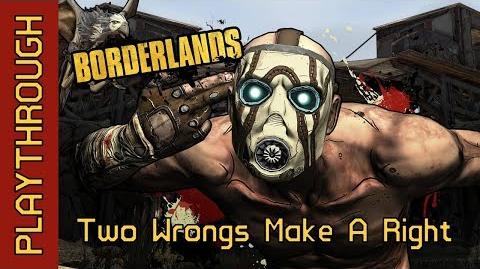 Eliminate Reaver and report back to New Haven.

Once in Krom's Canyon, a map marker to the right fork from the entrance denotes the way to Reaver. There are two groups of spiderants to contend with before fighting against the bandits. Some bandits will initially attack on the ground however most are up in raised areas of the canyon walls. The final encounter area for Reaver is just beyond a barricade that can be removed by way of a lever to the left of it.

Inside this area is another bandit ambush before the fight with Reaver himself. Reaver is concealed in a cave at the back of the area and will emerge when the cave is approached. He fights with Reaver's Edge, a sniper rifle that keeps his fire rate low, so any sort of knockback attack can be especially useful against him.

He is not overly durable, so it is possible to just murder him while he emerges from the cave.

"Jed joined the bandits, took the name 'Reaver', then murdered his own father? Then you killed Jed? Well, that's a lot more horrible than I'd imagined. I'm in shock, I think. Here's your payment, with a little extra for going above and beyond what I asked for. I guess it's all for the best, but please, never contact me again."