Turrets in Borderlands: The Pre-Sequel are fixed position weapons, some permanently mounted on structures, some mounted on vehicles, and some that may be deployed by specific classes of Dahl.

The permanent turrets found throughout Elpis were all originally manufactured by Dahl, and come equipped with either homing missiles or a laser cannon. Both types look identical, and require identical strategy to deal with. Other than the type of armament, the only difference between examples is the name, which varies with both type, location, and controlling faction (Dahl or scav). They can be found in various places, but the greatest numbers of respawning turrets are in Triton Flats (4), Pity's Fall (6), and Vorago Solitude (4).

All permanent turrets are armoured, and are equipped with a shield. As a result, a combination of shock and corrosive grenades and weapons is recommended. Cryo and explosive can also be effective, especially since turrets can't fire when frozen. Engaging laser turrets from a distance, where possible, is advantageous due to weapon spread; otherwise, terrain and other structures provide useful cover.

Beam weapons with low recoil and sway are highly effective, especially against missile turrets: when aimed straight down the launcher, the continuous discharge of beam weapons will detonate any missiles as they emerge. If damage is further boosted (eg. using a Prismatic Bulwark shield and/or character skills), it is possible to destroy a turret using only a shock beam laser.

Dahl Lost Legion Engineers can deploy a laser Field Turret, along with shields and wormhole generators. These turrets are typically burst fire, armoured, and may also be shielded (depending on game mode.) They are similar to the field turrets deployed by Hyperion forces in Borderlands 2. Engineers will tend to throw them out behind Vault Hunters, catching them in a crossfire. Boosting then slamming is a good way to avoid fire and damage the turret quickly.

This form of turret is encountered only in Eleseer, and requires the presence of at least one Opha to appear. As a result, they are encountered most often during the main story and the Z8N-TP and Sterwin Forever side missions. There are numerous pillars with pale blue and purple markings on them located at numerous points around the exterior platforms. A set of three similar features are located above each doorway between the inner and outer zones. The Putti released by an Opha can dock with these pillars, forming a turret called a kestros. These biomechanical turrets are shielded and armoured, just like other turrets in the game, and fire purple energy bolts that can deliver significant splash damage.

The final type of enemy turrets encountered are those on Moon Buggies. This includes the Laser Moon Buggy driven by scavs and the Missile Moon Buggy driven by Lunestalker Sr. in Triton Flats. The only significant difference between these and their permanent turret equivalents is that they can continue firing even when the vehicle they are mounted on is frozen. 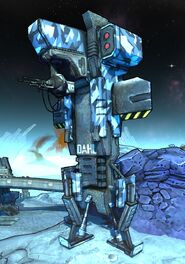 Perimeter sentry turrets serve as a boundary marker for the various areas around Elpis. They're identifiable by being mounted on the tall towers at the edge of the map. Proceeding beyond them will invite a warning which is a blinking bar in the middle of the screen, and if travel is continued further the character will die instantly and re-spawn at the last New-U Station visited.

Unlike their Borderlands 2 counterparts, there are no warnings in the form of recorded messages.

Retrieved from "https://borderlands.fandom.com/wiki/Turret_(Borderlands_Pre-Sequel)?oldid=431243"
Community content is available under CC-BY-SA unless otherwise noted.