A turret in Borderlands is a fixed, swivel-mount weapon with a wide firing arc.

Automated gun turrets are computer controlled static defence weapons that can operate independently of human controllers. When a target they perceive as an enemy enters their line of sight they will turn to track it and open fire. The rate at which they can rotate to fire on targets is typically quite slow, although they do make up for their sluggish behaviour with an endless ammunition supply feeding a consistent barrage of fire on their targets. When they have no target, they will rotate and sweep around their fire arc.

Some Turrets are fitted with a pop-up mechanism. These will remain concealed until a potential threat ventures quite close to them, at which point they will activate, rise into view and open fire.

Gatling Turrets are fixed gatling guns with a 360° firing arc. They are frequently employed by both Bandits and the Crimson Lance for added defensive firepower around their strongholds. They track their targets with a red coherent laser, often seen running parallel to their stream of bullets, and are protected by rechargeable shields. The weak point on a Gatling Turret is a fuel tank mounted at the rear of the weapon that yields critical hits when damaged.

Rocket turrets are fixed rocket launchers with a 360° firing arc, commonly found in the hands of bandits. They are distinguishable by a quad barrel rocket launcher mounted on the front and fire a steady supply of rockets at a moderate rate. The weapons fire is guided by a red coherent laser that sweeps the field of view to track a target. Some rocket turrets, including those deployed in Jaynistown, fire homing missiles that curve to track their target. The weak point on a Rocket Turret is a fuel tank mounted at the rear of the weapon that yields critical hits when damaged.

Scorpio Turrets are small portable sentry guns that can be deployed by the Soldier class of player character and also Lance Engineers of the Crimson Lance. While active they operate as an automated machine gun with about a 120° field of fire. A pair of force shield wings fan out to each side offering some partial cover for their owner. A Scorpio Turret will vanish from the field when their owner is killed (or crippled), so an often recommended strategy is to target the person who deployed the turret first.﻿

Sabre Turrets are turrets that can be deployed by the Commando and Dahl's personal army on command for use on the battlefield. It has a 360° field of fire, and can be upgraded to shoot rocket pods, have a targeting laser, longbow functionality, mag-lock bases, a shield emitter and a secondary gun that shoots slag bullets. 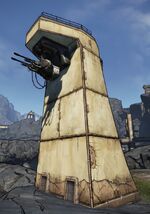 Perimeter sentry turrets serve as a boundary marker for the various areas around Pandora. They're identifiable by being mounted on the tall beige towers at the edge of the map (In Jakob's Cove, however, some of these turrets are mounted on old, derelict buildings and wooden structures). Proceeding beyond them will invite a warning which is a recorded message accompanied by a red bar in the middle of the screen, and if travel is continued further the character will die instantly and re-spawn at the last New-U Station visited.

The bandit lord Krom commands his forces from a unique turret that combines many of the advances of the larger individual turrets into one lethal form. Structurally it is a manned turret very similar to the Mulciber Mk2, but builds on the gatling gun weapon system with an advanced rocket launcher able to fire "helix" salvoes, a trio of rocket submunitions that spiral together to their target. Krom regenerates life and by extension, so too does the turret.

The Mulciber Mk2 turrets are exclusively fielded by bandits and require a gunner to operate them.

Vehicular turrets are fixed on various vehicles found on Pandora. These open cupola turrets come in two varieties; A machine gun mounted directly in front of the gunner or a rocket launcher mounted on the gunner's left with the control system in front. The entire cupola is very responsive to the gunner's control and these turret weapons can track to targets very rapidly.

Vehicular turrets can be found on:

Hiding behind cover or shooting static defense turrets from an area where it can't shoot back, such as at long distance or directly below the turret, works wonders. Shock weapons to take out the turret's shield and Corrosive weapons used on the turret itself are a very effective combination.

Retrieved from "https://borderlands.fandom.com/wiki/Turret?oldid=433194"
Community content is available under CC-BY-SA unless otherwise noted.