Troy Calypso is one of the two main antagonists of Borderlands 3, and a co-leader of the Children of the Vault alongside his twin sister, Tyreen Calypso. Together, the two are referred to as the Twin Gods by their followers.

Naturally weaker than his sister, Troy plays a relatively passive, even submissive role in comparison to her. However, after killing Maya and taking her powers, he gains an ever-increasing power-high and quickly begins forcing himself into the limelight alongside Tyreen, much to her chagrin.

Troy and Tyreen were born conjoined to Typhon and Leda DeLeon on the Eridian homeworld of Nekrotafeyo. Troy was a parasitic twin, meaning he was born less developed than his sister and actively leeched sustenance from Tyreen. Tyreen's Siren powers manifested early on, and, in an unprecedented turn of events, spread to Troy as well. It's not known exactly when they were separated, with some details suggesting it was shortly after birth, and others pointing toward their separation being during childhood.

The exact nature of the Twins' childhood remain clouded in bias. According to Troy, the two were kept caged and incessantly watched over by an overbearing Typhon, something which only became more oppressive after the death of their mother. However, Typhon reveals that he kept the two of them on Nekrotafeyo in order to protect them, a fact that was complicated by his many stories about vault hunting, which enamored the Twins and only made them desire to escape Nekrotafeyo, viewing more as a prison than a home.

Ultimately, their unstable childhood resulted in them developing into extreme misanthropes as adults. Exposure to Typhon's stories of Vault Hunting filled the Twins' heads with ideas of divinity and grandeur and the two of them ultimately escaped Nekrotafeyo to explore the galaxy in search of Vaults. In the process, they managed to rally the psychotic bandits across the galaxy to their cause by appealing to their weakened mental stabilities, forming the cult known as the Children of the Vault.

Troy is just as cruel and sadistic as his sister, Tyreen. However, it is clear that he is somewhat intimidated by her, as well as submissive, spending a good portion of the first arc of the game playing second hand to Tyreen. Though this clearly creates some degree of unspoken disdain between the two, Troy remains nonetheless loyal to Tyreen, even after growing increasingly powerful.

When not actively committing acts of needless violence and mass murder, Troy exhibits a slightly more intimate and vulnerable side when interacting with the Vault Hunters, coming of as something of a giddy dork in comparison to Tyreen. However when set off, Troy also shows that despite these inklings of humanity, he's still an unhinged individual who can snap back to a dangerous state in a moment's notice.

Both Troy and Tyreen have a bad habit of underestimating the threat level of their opponents and often leave them alive, something that frequently comes back to bite them. Troy in particular does this on two occasions, leaving Ava alone in The Forgotten Basilica and releasing the Vault Hunter from Phaselock after being shot by Wainwright Jakobs.

As the Crimson Raiders prepare to leave Pandora aboard Sanctuary III, the launch site is suddenly assaulted by the Children of the Vault, led personally by Troy and Tyreen with the intent of recovering the Vault Key. Amidst the chaos, Lilith is forced to face off against the two Calypsos by herself. While Tyreen fights Lilith, Troy broadcasts the fight across the ECHOnet. After Tyreen is knocked away, Lilith teleports behind Troy and knocks him down, where she is shocked to learn that he too is a Siren. Troy remarks that it "runs in the family", giving Tyreen enough time to subdue a distracted Lilith; Tyreen reveals that Troy is a parasite, and that she is the only thing keeping him alive as she begins to leech Lilith's powers. Before Tyreen can completely kill Lilith from the process, Troy convinces Tyreen to stop in order to give him some of the absorbed power. After making a mockery of Lilith and recovering the discarded Vault Key, the two leave her to die at the hands of their followers while they leave to check up on their deal with Katagawa Jr. on Promethea.

Once the Vault Hunters open the Vault on Promethea at The Forgotten Basilica]and defeat its guardian The Rampager, Troy and Tyreen arrive after the Vault Hunters finish looting the Vault. The two thank the Vault Hunters for doing all of their dirty work in defeating The Rampager as Tyreen leeches The Rampager's power, while Troy reveals that the monsters contained within the Vaults are the source of their power. After giving Troy some of her absorbed power, Tyreen apprehends Ava, though Maya retaliates by phaselocking Troy and forcing him into an headlock, demanding for Ava to be released. Once Tyreen complies, Troy grabs ahold of an unaware Maya's arm and drains her of her powers, leaving Maya to fade away. An enraged Ava attempts to shoot Troy, only to be phaselocked by him, leaving both Troy and Tyreen to be surprised at his feat. With their mission complete and an extra bonus, the Calypsos take their leave, though not before Troy sarcastically remarks to Ava on who to call if she ever becomes a Siren.

After making a mockery of Maya's death across the ECHOnet, the Calypsos and their followers travel to Eden-6 to search for its Vault. While Tyreen establishes an alliance with Aurelia Hammerlock by killing Montgomery Jakobs and allowing her to take control of the Jakobs Corporation, Troy begins to conduct experiments with his phaselock powers on several prisoners at The Anvil. The result is the creation of his own personal super soldiers dubbed the "Anointed," powerful members of the Children of the Vault infused with his phaselock powers.

Not long after the Vault Hunters arrive on Eden-6 and save Sir Hammerlock from captivity at The Anvil, they are soon contacted and instructed by Aurelia to leave the moon, being offered a large sum of money if they comply. Using this as a means of gaining access back to his former homestead, Wainwright Jakobs tasks the Vault Hunters to play along and sends them to meet Aurelia. Instead however, they are met and phaselocked by Troy, revealing that Aurelia's deal was a ploy to get the Vault Hunters into their clutches. Troy reveals to them his mastery of his phaselock powers, more so than Maya ever could, as well as his unsatisfying place under Tyreen’s shadow before revealing he intends to kill the Vault Hunters personally. Before he can do so however, he is shot and wounded by Wainwright, who forces Troy to chase after him around the mansion, giving the Vault Hunters enough time to escape with critical information that would lead them to the Vault Key fragments of Eden-6.

Knowing that the Calypsos were after the power of the Vault monsters, Patricia Tannis devises a plan to nullify the next Vault monster's power to prevent the Calypsos from siphoning it. After locating the Vault of Eden-6 at The Floating Tomb, the Vault Hunters open it and defeat its guardian The Graveward. After its death, Tannis successfully nullifies The Graveward's power, much to the annoyance of the Calypsos, who call the act "uncalled for". However, after the Vault Hunters finish looting the Vault of the Graveward and regroup with Tannis, Troy remotely phaselocks Tannis and has Tyreen promptly warp her away.

As the Vault Hunters arrive, Troy reveals himself and engages the hunters in a lengthy battle, all while opening the Great Vault and leeching power from his sister at the same time. Despite his best efforts, Troy is ultimately defeated, and laments to his now unconscious sister that they were so close in opening the Great Vault before collapsing onto the ground, dead. Ava, Lilith, and Tannis soon join the Vault Hunters, and Ava touches Troy's arm, absorbing Maya's former phaselock powers from him and becoming a Siren in the process. While the Crimson Raiders celebrate their victory, Tyreen awakens and acknowledges Troy's sacrifice, congratulating him for completing his mission and promising to continue their work "together" as she absorbs Troy and the last of his essence completely. 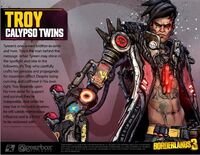 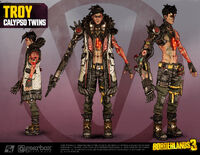 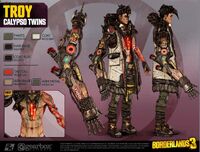 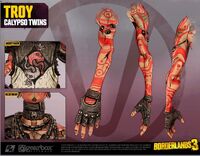 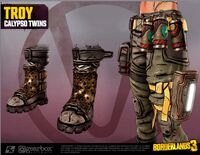 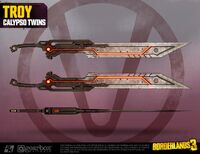 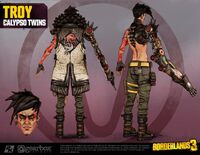