Trinkets are cosmetic items introduced in Borderlands 3 that are applied to weapons. They appear as keychains which hang off a weapon, and are earned through completion of quests, challenges, or any suitable loot source, with some available only through cosmetic DLC packs or seasonal events. They offer no additional bonuses to weapons and are purely cosmetic.

The position and size of a trinket is dependent on the weapon it is equipped on. Most weapons will have a small trinket hanging by the bottom left of the gun, though Hyperion shotguns in particular have large trinkets that hang directly in front of their ammo count screen.

Trinkets are applied to weapons in the inventory menu. A small box is located to the left of each weapon slot. Clicking on the box will display all owned trinkets which can then be applied. Each weapon slot can equip a single trinket, which will then be shown on any weapon equipped in that respective slot. There is no restriction to how many times a trinket can be used; a single trinket can be applied in all slots if wanted.

The Loot Boxer slot machine (the one closest to the door in Moxxi's bar on Sanctuary III) will drop trinkets when landing on three "middle finger" icons. Any suitable world drop trinkets can drop from this machine (i.e. not the ones purchased from Earl or given as mission rewards).

These trinkets are unlockable in the Borderlands 3's main game through quests, challenges, Crazy Earl's Eridium shop, or as drops from any suitable loot source.

The main story DLC also includes additional trinkets which can be unlocked, which will be detailed here as new DLC is released.

These trinkets are available through purchase of cosmetic DLC packs, most of which were also included in the Borderlands 3 Deluxe and Super Deluxe editions.

These trinkets are unlockable through special events like Bloody Harvest.

These trinkets have not yet been found in-game. They may be bugged, very rare, non-existent, or removed before release.

The "Vault Insider VIP" legendary trinket on a Vladof pistol 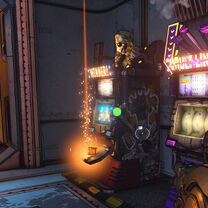 Trinket cubes when dropped as loot (Rare, Epic, and Legendary).
Community content is available under CC-BY-SA unless otherwise noted.
Advertisement