Trial of Survival is an optional mission in Borderlands 3. It can be picked up from the Overseer in the Gradient of Dawn.

The Trial of Survival is inhabited mostly by animal-like enemies, including spiderants, varkids, and skags. Most of the enemies will be flesh based, however, some badass variants can be armoured. There is a single shielded enemy: the Fallen Guardian. It is worth noting that the Skag of Survival that is fought at the end of the mission can be charged with two elemental powers and immunities. Thus it is important to bring either a wide array of elemental weapons or a non-elemental gun.

The mission leading to Trial of Survival is acquired from the Eridian Lodestar in Devil's Razor. 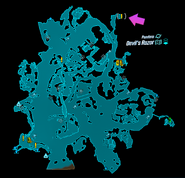