Trial of Discipline is an optional mission in Borderlands 3. It can be picked up from the Overseer in the Precipice Anchor.

The Arbalest of Discipline is an armored enemy (yellow health bar). As such, it is more susceptible to corrosive and cryo damage while being resistant to all other forms of damage (see Elemental Damage for detailed percentages).

The mission leading to Trial of Discipline is acquired from the Eridian Lodestar in Meridian Outskirts. 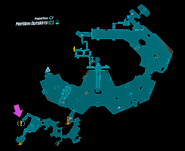