Tree Hugger is an optional mission in Tiny Tina's Assault on Dragon Keep.

When the mission is accepted, Aubrey offers a seed. This must be planted and protected from the orcs at Blood Tree Camp while it matures into a fully grown treant. Orcs of various kinds attack for a while, although these are units tied to the camp rather than the mission and can be cleared before the sapling is planted, leaving it with no attackers while it grows.

Once the sapling is fully grown, it becomes a treant named Mosstache, and proceeds to wreak havoc in the orc camp. Mosstache lumbers around the camp destroying six huts in succession with a powerful ground pound attack. Defending orcs will emerge from each of the huts to attack Mosstache, and for the most part will stay near their hut whilst trying to destroy the treant at melee range. The final two huts have Badass Orc Warlord which may need to be eliminated quickly to prevent them acquiring levels that might prove threat enough to block Mosstache from completing its mission.

Once the final hut is destroyed, Mosstache wanders a short distance into the camp and expires.

"Hell hath no fury like an apathetic tree scorned."

Turn In: Aubrey the Teenage Treant 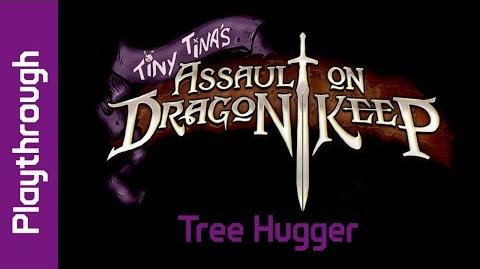