Treacher's Landing is a bandit-infested island located some distance of the coast, south of The Rust Commons West. It is connected to the coast via a long walkway suspended over the water (though the transition point automatically bypasses the walkway).

Treacher's Landing was established on Pandora as the location of a fishery. The fishery was one of the food suppliers for the inhabitants of Pandora. Since the Dahl corporation left the planet, the island and factory have been taken over by bandits.

Here is a map of the area with prominent items marked. 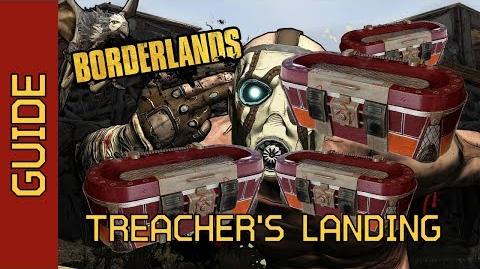 Retrieved from "https://borderlands.fandom.com/wiki/Treacher%27s_Landing?oldid=430265"
Community content is available under CC-BY-SA unless otherwise noted.