Trash Coast is located south-east of The Rust Commons East. It is a barren area full of trash on the coast, hence 'Trash Coast'. It is overrun by spiderants and is home to the Rakk Hive. A part of the Vault key is also acquired here.

According to Patricia Tannis, bandits control the entrance to this area.

The coastline is filled with trash, though it also offers potential for resources. However, this had been made impossible with the numerous spiderant colonies in the area, who would overwhelm any attempts at human habitation. Despite this, there are several bandit settlements around the southern end of the coast, one of which placed a Spiderant Queen's abdomen to in their camp to ward off the nearby colony. 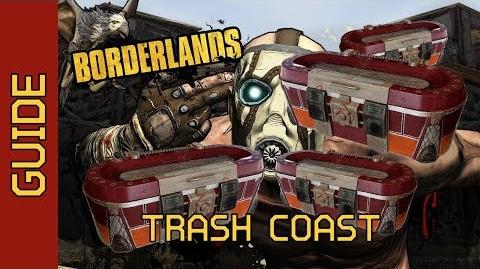 Ingame map of location
Add a photo to this gallery
Retrieved from "https://borderlands.fandom.com/wiki/Trash_Coast?oldid=430264"
Community content is available under CC-BY-SA unless otherwise noted.