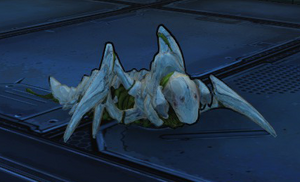 Torks are chitinous creatures infesting areas of Elpis and Helios's Research and Development. They are primarily scavengers, but are also predatory in nature and will attack anything that approaches their nests.

Torks have an insect-like hierarchy, with intermediate torks fighting for their queen, who is capable of spawning lesser torks to aid her.

Smaller torks typically move very fast, but are usually relatively weak and rely on their small size and speed in combat. Their offensive abilities are typically rather limited, with their most prominent attacks being leaping from afar or running into melee range to swipe with their front legs, with occasional long-distance spit attacks. One of their only defensive tactics is the ability to leap onto walls to partially obscure themselves from attack, which is often followed by surprise leap attacks.

Larger torks are comparatively different in their tactics. They are incapable of leaping onto walls and do not move nearly as fast as the smaller torks. They also have substantially more health, and utilize a much more diverse variety of attacks.

All torks are most susceptible to incendiary, explosive and being frozen by cryo, with corrosive and shock being less effective. Small torks are able to be knocked back by slam attacks, but larger ones often cannot.

Similarly to Spiderants, torks' critical hit locations are not their heads - their critical locations are always either their abdomen/tail, or in proximity to them.

Retrieved from "https://borderlands.fandom.com/wiki/Tork_(species)?oldid=434868"
Community content is available under CC-BY-SA unless otherwise noted.